Movies and TV shows are often some of the most compelling ways to tell history, but they’re not without cost. Along with every attempt at bringing history to the big or small screen comes the critiques of historians, and we’ve certainly analyzed our fair share. Whether it’s structural inaccuracy or imperfections in costuming and makeup, the challenge of adapting the mess of history to a neat narrative always results in some problems, minor or glaringly major. Despite these flaws, however, there are some stories you can’t help but enjoy. Here we’ve assembled a taste of our historical guilty pleasures: movies and TV shows we fully recognize have problematic relationships with the history they portray, but we love them all the same. 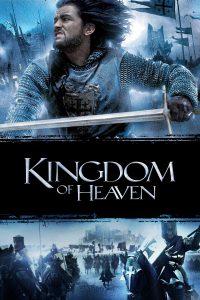 Kingdom of Heaven (2005) – Ridley Scott’s epic tale of the fall of Crusader Jerusalem has flown under the radar for many due to its lackluster theatrical version, which had been severely downsized from Scott’s original vision. Watch the three-hour director’s cut, however, and behold a masterpiece of a movie. The ensemble cast, including Orlando Bloom, Eva Green, Jeremy Irons, Liam Neeson, and an uncredited Edward Norton, is amazing, and I never tire of watching the hauntingly beautiful opening scene or listening to the movie’s stunningly evocative soundtrack. Students of history beware, however! Creating a personal story out of medieval high politics of course results in a shaky historical narrative at best, and Scott intended to make not a brutally accurate film but one in line with romantic depictions of crusaders from the Middle Ages to the present. The main reason this is an historical guilty pleasure of mine, though, is Scott’s overt insertion of modern sensibilities. The protagonist and his allies abide by a code of religious relativism stemming not so much from commercial or political pragmatism as from moral philosophy. The villains of the piece are not the Muslim forces of Salah al-Din but the fanatical Knights Templar, who seek to wage intolerant religious war across the Holy Land. Such sentiments are relatable and even necessary for a 21st-century audience, but extremely ahistorical coming from a 12th-century French knight. These thoughts have never been far from my mind the countless times I have watched Kingdom of Heaven, yet still it remains one of my favorite movies. – Bryan 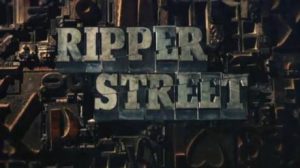 the show follows a dauntless police detective, his hard-hitting but big-hearted sergeant, and a former Pinkerton detective from the States with forensic expertise and a shady background. Like many historical dramas, Ripper Street plays fast and loose with facts and chronology. Most of these choices are venial; the worst they do is suggest that everything in 1890s London happened all at once to the same three men. But in its attempt to represent the legendary brutality of Whitechapel, the show plays around with certain real life events in troubling ways. For instance, season two features Joseph Merrick, the Elephant Man, who becomes entangled in a police investigation. After witnessing a crime, Merrick is murdered in bed to prevent him from revealing the culprit. The fictional Merrick’s end invokes the real Merrick’s death by asphyxiation, twisting his tragic death from natural causes into a macabre “what-if.” In this narrative choice, the show’s producers reduce Merrick to a disposable curiosity, the same role he occupied throughout his life. At other points, the show romanticizes the violence of the streets, almost hinting at a certain Wild West element of life in Whitechapel.

These moments notwithstanding, the show is engrossing, not least because of the thorough attention paid to the characters’ 19th century diction and syntax, their detailed costumes, and the immersive sets. The series also makes immense efforts to display London in all its metropolitan glory:  a city home to nobles, industrialists, laborers, prostitutes, Irish, Jews, Muslims, and other denizens of the British Empire. Any lingering historical qualms I have are eased by brilliant performances from Matthew Macfadyen and Jerome Flynn, better known for his role as Bronn in HBO’s Game of Thrones. – Kevin 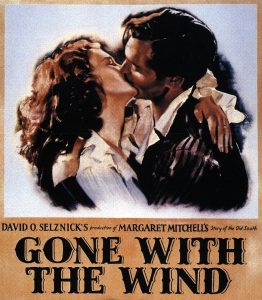 Gone with the Wind (1939) – I love 1939’s Gone with the Wind. It’s a truly frivolous delight from beginning to end and it holds a special place in my heart. Even so, though, it can’t be categorized as anything but a guilty pleasure by any viewer who does not have their head hopelessly lost within their posterior. From the moment the film opens with its saccharine prologue about the “pretty world [where] Gallantry took its last bow[,] the last ever to be seen of Knights and their Ladies Fair, of Master and of Slave,” it is a nauseating ode to Lost Cause mythology. Where Margaret Mitchell’s Scarlett O’Hara from her 1936 novel of the same title examines her society with at least a somewhat critical eye for hypocrisy and quotidian barbarities, the film’s heroine narrows that critical scope to only those issues that directly inconvenience her. Gone (with the wind?) are those vignettes exploring cultural injustices, leaving in their place only the childish poutings which peppered Scarlett’s journey in the novel. The film is left to oscillate between lavish tableaus and infuriating episodes of protagonist petulance with none of the nuance of its source material, despite a nearly four-hour runtime that would easily have allowed for it. But despite being bowed beneath the immense weight of the Dunning School era in which it was born, Gone with the Wind is nonetheless a fun watch and one of my top 10 favorite movies. Filled with moments of sparkling wit and humor, sumptuous (if at times historically-inaccurate) costuming, a sweeping score, and relationship drama to rival that of a 1980s soap opera, the film is one that has captured hearts and imaginations for decades. It’s just unfortunate that every time I watch it, I am painfully aware that its danger lies in the massive interpretive burden that it forces less uninformed audiences to bear, and without which the work becomes a piece not only of historical legend but of historical propaganda. – Heather

Gladiator (2003) – Ridley Scott’s Gladiator is one of my favorite films; there is so much to admire in this epic tale. Who doesn’t love the moment when Maximus 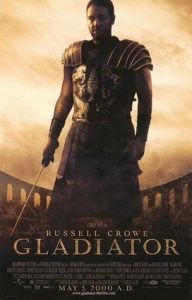 reveals himself to the cowardly and scheming Commodus in the middle of the Colosseum (or Flavian Amphitheater for the fact-conscious)? However, the idea that Marcus Aurelius and Maximus would support the revitalization of the Roman Republic in the late second century is an example of historical presentism, placing present day values and modes-of-thinking within the thoughts of historical people. Marcus Aurelius’s dream for a return to the Roman Republic speaks to Ridley Scott’s romanticization of a republican form of government as opposed to the authoritarian Commodus. It presents Marcus Aurelius as a grandfatherly philosopher-king seeking to restore virtue and reserved authority to a war-weary empire. That, however, is false. Marcus Aurelius spent the first half of his reign jockeying with a co-Emperor, Lucius Verus, until he claimed sole power and then proceeded to prosecute defensive wars against the migrations of Germanic peoples until his death in 180 CE. He also decided to name Commodus as his heir, breaking with the tradition of his predecessors wherein they chose the best man to be the next leader rather than letting the happenstance of birth dictate the future leadership of the empire. Ridley Scott’s epic is compelling, and the tale of an underdog such as Maximus is enticing, but it is still presentist; the historical facts of the film are changed to meet the expectations and biases of the presenter and recipient of the history, in this case Scott and his audience, rather than reflecting the context of the Roman Empire at the end of the second century. However, the presence of such presentism in Gladiator does not prevent me from popping in my copy of the DVD and revelling at the heroic Maximus. As I watch, I am indeed entertained and this film certainly does win the crowd. – Francis 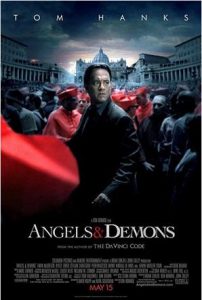 The Da Vinci Code and Angels and Demons (2006, 2009) – I suppose it’s worth starting with the disclaimer that neither The Da Vinci Code or Angels and Demons are works of historical filmography themselves (as far away as the early and mid 2000s feel at times). That said, both films in the Robert Langdon series draw upon history significantly, with both plotlines driven by references to Renaissance painters and scientists, medieval Christianity, and other historical subjects ripe for over-analysis through the lens of conspiracy. With Dan Brown’s original source-material constantly and mercilessly lampooned for the seriousness in which he tries to sell the legitimacy of the century-spanning sinisterness of organizations such as the Illuminati and Opus Dei and with both films rating no higher than 37% on Rotten Tomatoes, my love for these movies is as inexplicable as it is strong– which is to say, very. There is something that I find incredibly thrilling about Professor Langdon’s chases across London and Rome, however. In a world filled with films headlined by musclebound Adonises armed to the teeth with military-grades weapon whose idea of problem solving is blowing up the nearest building, Tom Hank brings a much needed nerdiness to the realm of thriller films, as well as his usual talents. The theological machinations of the films’ sinister forces, if hilariously implausible, are tantalizing on their own: a safe dip into the realm of far-reaching historical conspiracy and counterfactual speculation, driven forward by the adventures’ adrenaline and safely locked back away when the credits begin to role. Significant performances by Ian McKellen and Ewan McGregor certainly add to both films as well– watching Gandalf go on about the Sangreal and Obi-Wan Kenobi lecture a room full of cardinals is surprisingly pleasant. (As an aside, is it a coincidence that both recently starred together in Beauty and the Beast? Or have the Illuminati struck once more? Who can really be sure?) When all of this is rolled into numerous beautiful backdrops (especially in Angels in Demons, exclusively set in the Vatican City and Rome) and a masterful score by Hans Zimmer, both films transport me to a mindset where I’m able to set aside their problematic relationships with historical truths, and wonder, for about a combined total of approximately 287 minutes, what if it actually was true? – Ryan
So there you have it! Some of our favorite guilty pleasure movies, laid bare for you all to see. What do you think? Do you have some of your own? Any other movies you’d like to see us give the same analytical treatment? Let us know below! We had a hard time narrowing down our own list, so make sure to stay tuned for future review posts where we’ll get to cover what didn’t make the list here.