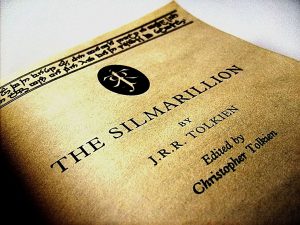 This Friday is an important day in literature. September the 22 is the birthday of the iconic characters Frodo and Bilbo Baggins, and as such has been fondly designated ‘Hobbit Day.’ In honor of these two fine halflings, I figured I might record some of my own ruminations on the legacy of the man who brought the Bagginses, and their entire world, so vividly to life.

The popularity of J.R.R. Tolkien’s Middle Earth can hardly be contested. For over half a century his fantastic tales have delighted and entranced readers of all ages and backgrounds while single-handedly founding an entire genre of modern fiction. Their centerpiece, The Lord of the Rings, has inspired three massively popular movies (including the most successful film in the history of the Academy Awards), while together with its prequel story The Hobbit considered essential literature of the English language. What can account for our society’s deep and abiding love for these fantasy novels? Most obviously, their stories and characters have endearing and timeless appeal, yet a third answer has always been the most compelling to me (and justifies this post’s inclusion on a history blog): the tangibility of the world Tolkien created.

The effort Tolkien invested in his ‘sub-creation’ and accompanying legendarium is, well, legendary. As a professor of linguistics at Oxford, he even famously devised multiple complete languages, scripts, and lexicons for the world of Arda (Middle Earth is but one of Arda’s continents) as well as complex genealogies and even a creation story. Contrary to popular belief, however, Arda is far from perfect; it is, in fact, a giant mess of world-building. Inconsistencies, redundancies, and omissions abound, and for good reason. As explained by his son Christopher in the preface to The Silmarillion, Tolkien’s creation was not simply a background for a few stories but an entire world that he carried with him, endlessly changing and evolving throughout his life and in the notes with which he attempted to capture its essence. This unique process of imperfectly recording an unknowable world that changes in each telling might sound oddly familiar. It might, in fact, sound like the manner in which we process our own past.

Indeed, the more one reads Tolkien’s works, the less they seem like simple novels. Their composition and diction seem increasingly reminiscent of some ancient chronicle or epic, a resemblance that is not coincidental. Tolkien’s own study of medieval language and literature fueled not only his fictional content but the style in which created, and certain segments of his edited notes feel like they should be more properly recited aloud. Moreover, Tolkien’s writing gives a sense of scope and breadth nigh-inconceivable: his world does not exist as a backdrop for his stories; rather his stories are just one part of the grand history of his world. Even his personal notes at times were written as if he were not the creator of the world but a simple historian of it. Attempting to reconcile an inconsistency (the later presence of a character who died thousands of years earlier), Tolkien’s explanation contains such phrases as “We could then reasonable suppose…;” “According to accounts (quite independent of this case) elsewhere…;” and “It is indeed probable…”

This oddly passive manner of conveying his own creation is the very crux of Tolkien’s appeal, for Arda and Middle Earth were, in Tolkien’s mind, not quite his creation at all. His entire legendarium was in fact created as an alternate mythos for the beginning of our own world. This is most noticeable in the case of The Hobbit and The Lord of the Rings. These tales are supposed to have been recorded by Bilbo and Frodo respectively in their Red Book of Westmarch, which came down through circumstance to Tolkien’s keeping. Other signposts are less visible, though more interesting: the Arthurian isle of Avalon, for example, is one and the same with Tolkien’s Tol Eressea, the easternmost part of the Undying Lands of Valinor (which holds the city of Avallònë).

More than any simple stories, then, Tolkien’s legendarium is a living, breathing world on its own, not existing to serve any one narrative aside from its own rich history. In methods and presentation, Tolkien offers much that students of history can admire. For his more general audience, though, exploring this world alongside its author offers an experience that resonates with not only authenticity but familiarity, for indeed one is reading a history book of our own world, if one with a few more orcs and hobbits than usual.

One reply on “Echoes of History: Tolkien’s Timeless Appeal”

Bravo! Lovely comparison drawn between the way Tolkien writes about his world and the way historians write about ours. A friend of mine took a class at her university about how Hobbits and the Shire represent the quintessential pre-WWI England and I have never been more jealous of her.