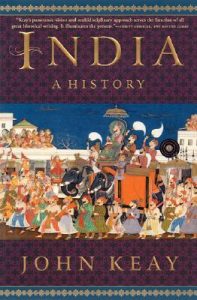 I recently realized that, despite my familiarity with its later imperial history, I had little acquaintance with the history of India before the early modern era (and even that was pushing it). When I learned that, before his history of China (reviewed here on Concerning History), John Keay had composed a history of the South Asian subcontinent, I decided to rectify this situation. In so doing, I became perhaps the most aware of how difficult an undertaking such a history must necessarily be.

Based upon my delight previously reading Keay’s history of China, I had expected to immensely enjoy India: A History. This was unfortunately not to be the case, though it did entertain. The fault for this lies not so much with any factor under Keay’s control but rather the nature of his subject. Unlike China, ‘India’ as a unified historical or even political entity has only existed for perhaps two hundred years, if that. Before its conquest at the hands of the British, India was simply the geographic expression for a subcontinent that was home to myriad kingdoms, empires, languages, religions, and peoples. To compound this difficulty, written records do not exist in Indian history until much later than elsewhere, forcing modern historians to rely only on what archaeological evidence exists for more than two millennia of India’s past. A single history of India, much less in only one volume, must then be highly selective as to what topics it covers. Keay’s narrative can correspondingly feel scattered, flitting from place to place and ruler to ruler while often backtracking to cover periods already mentioned when discussing another region. Wherever Keay’s attention settles, however, he can be relied upon to spin an engaging narrative replete with witty asides and fascinating anecdotes.

Certain other weaknesses with Keay’s work derive not from the nature of his subject but from his own style and focus. Like with China, India: A History is a work of high geopolitics; great men and great works of architecture are its lifeblood and milestones. The lot and life of ordinary people is seldom mentioned, nor are cultural topics given much attention. This is particularly distressing in regards to the great religions and epics of ancient India. Buddhism, Hinduism, the Ramayana, and the Mahabharata are especially alluded to with the frequency that befits their foundational importance, yet Keay cannot be bothered to actually summarize their content for his readers. Indeed, in his introduction he even oddly argues that such explanations would somehow detract from or un-focus his history. In reality, the lack of any such explanations deprives Keay’s repeated allusions of any foundation or easy comprehension. Issues of terminology also arise: Keay insists on using the term “orthodox” to refer to traditional Hindu beliefs (as opposed to Buddhist or Jain teachings), yet such a pantheon of divinities and rituals cannot be orthodox (same-belief); it must be orthoprax (same-practice). Keay’s omissions even extend to arenas that might otherwise align with his treatment of political history. As he pursues his final narrative, that of the growth of Indian nationalism and the establishment of India’s independence in 1947, India’s involvement in both World Wars slips by almost as an afterthought. The specific events, efforts, provisions, and service of India and its people in support of the British war effort is never revealed in any detail. So too are the miseries of the great Bengal famine and the violence following Partition glossed over; mentioned as such, but never truly described.

India: A History is certainly a flawed work of history, though not without its merits. A general and entertaining overview of the political history of India’s peoples and polities can be gained from its pages. A sense of India and its people themselves, however, must unfortunately be found elsewhere.