By some coincidence, I found myself immersed in two stories of alternate history this fall. Both imagined the hypothetical scenario of American democracy being hijacked by mid-twentieth-century fascism. The first was It Can’t Happen Here by Sinclair Lewis, a 1935 satirical novel in which the author asserts that it very much could happen here in spite of his contemporaries’ insistence that America was immune to Europe’s deplorable ideologies. The second, a television show, was Amazon’s The Man in the High Castle (based on Philip K. Dick’s novel of the same name) that imagined America in the 1960s under the domination of Imperial Japan and Nazi Germany. Alternate realities like these don’t tell us much—or anything—about history, but they certainly say a lot about how we understand our past, our present, and our possible futures.

Obviously, there’s something about the year 2017 that makes the coincidence of consuming these works together less remarkable, but I wasn’t consciously thinking about the connections when I began them. It didn’t take long, however, for common themes like arbitrary justice, police rule, and stoic American resistance to leap out and beat me over the head. It was depressing, really, especially in conjunction with my modern European history coursework this semester.

The two stories take dramatically different approaches to dealing fascism. They’re written, of course, for different purposes. Amazon’s drama is a thrilling story about the resilience of American exceptionalism and resisting tyranny, whereas Lewis offers biting social commentary. The Man in the High Castle treats fascism as a foreign import accepted by the United States only after its (improbable) defeat in World War II, while Lewis places the vile ideology and its homegrown appeal at the center of his story. His work is speculative, written without the comfort of knowing that democracy would survive and thrive for the duration of the 20th century. When we watch The Man in the High Castle, we can take comfort in thinking that we’re not in the darkest timeline without realizing how easy it would be to fall into it. While I am happy to plug The Man in the High Castle to anyone looking for a good bit of alternative history drama, it’s to Lewis we should turn when imagining a fascist America. 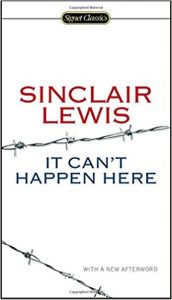 The conflict of It Can’t Happen Here begins with the election of Buzz Windrip, a smooth-talking good-old American boy who rides a wave of populism into office. Windrip is tough on communism, asserts the supremacy of white America, and promises free money to his supporters. Within months of his election, Windrip establishes a paramilitary police force and begins purging his enemies from office. This is all to the dismay of Lewis’s hero, Vermont newspaperman Doremus Jessup, who sees through the veneer of nationalism and bears witness to the collapse of American democracy. The trauma Doremus experiences as his country betrays its ideals facilitates his transformation into a hero willing to risk himself to defend them. As Windrip appropriates the imagery of the Civil War—simultaneously promoting the eradication of African Americans—Doremus struggles over the war’s legacy and his responsibility to it. Early on, he dismisses John Brown as a radical and even wonders whether Lincoln pushed for change too fast. By the end of the book, he recognizes that certain systems, like slavery and fascism, are so wrong that they must be rejected immediately and absolutely. Yet Doremus, Lewis’s essential American, never turns to communism or abandons his faith in the individual during the fight against fascism. Instead, he comes to understand the responsibilities of the citizen as something more than lofty ideals or empty rhetoric.

Democracy is fragile. Lewis recognized it in 1935 and it took us until recently to remember it. I say that not as a specific attack—justified or not—against the current White House administration. Instead, I think it’s a consideration we should have made earlier and must make now. It’s not on the federal bureaucracy, the Supreme Court, or our state governments to see through the BS on social media, Fox News, and elsewhere that undermines the potential of our country. It’s on us.

6 replies on “Fascist Americas: It Can’t Happen in the High Castle”

The “we’re better than that” mentality never fails to infuriate me. There’s no such thing as an isolated incident that marks a point when something “goes bad”. Hindsight may be 20/20, but cultural shifts take time and there are always indicators. There are culminations certainly, but those are precipitated by changing trends, something that most often creeps. “Not in America”, tell that to the survivors of the Japanese interment camps. Tell it to the victims of the federally sanctioned Tuskegee experiment. Not in America my ass.

Dead right. Thanks as always for your engagement on our posts. Out of curiosity, how did you find the site originally?

A friend from grad school plugged it on his Facebook page. I believe he knows Bryan.

How would you guys feel about a dialogue (in a point/counterpoint style) on the subject of historians in archives? (I’m an archivist)

Sounds interesting. Can you message our Facebook group (www.facebook.com/ConcerningHistory) so we can talk privately with the full team about the idea?