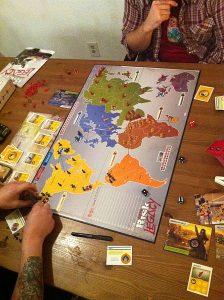 We all interact with history in so many ways that show our love and joy for the subject. Reading, writing, discussing, watching movies and TV (and let’s not forget running history blogs); there’s no shortage of ways to consume and revel in history. One admittedly-geeky avenue that lies close to my heart is the realm of historically-set strategy games, whether board games (like Risk and Axis & Allies) or video games (either of the turn-based variety, like Total War, or real-time, like Age of Empires and Europa Universalis). These games, especially the virtual variety, give me the unparalleled opportunity to really dig my hands into the workings of history and play around with its causes and effects. As with any media adaptation, however, historical strategy games pose the conundrum of accuracy versus enjoyment for an historian, yet this particular conundrum comes with its own unique paradox: a truly fun historical game lets players actively steer their own version of events.

These games are historically-set, however, so some degree of accuracy is also necessary, and, for me, that degree grows ever-higher the longer I’ve studied history. I can never refrain from nitpicking everything from playable factions to basic mechanics of the game. Rome: Total War makes ‘Germania’ a unified faction? Preposterous! Medieval II: Total War names its pre-Crusade factions after modern nations? Ridiculous! Axis & Allies: 1914 has no gauge for comparative army competencies? That makes Austria-Hungary hilariously viable!

I’ve learned, however, to be careful what I wish for. The real allure of these games for me is my ability to be inaccurate. What fun is simply re-creating history beat for beat when you can change its very fabric? Saving Constantinople in 1453; stopping European imperialism in the New World; winning Gettysburg as Lee or Fredericksburg as Burnside; these are the things that never fail to put a smile on my face. When certain games get too close to historical reality, they begin to break down and even fail as games. Europa Universalis IV is a particularly notable offender on this account. The game is so complex in recreating the world of the fifteenth through nineteenth centuries that I often ponder using it as a teaching tool, but if you recreate every exact detail of history (especially the economic and military dominance of Europe in the early modern era), where can you go but the path already trod? The same goes for board games like Axis & Allies that mandate team pairings and initial troop positions; options become so restricted that differing outcomes become a function not of ingenuity and skill but of the pure chance of a die roll.

The heart of this conundrum cuts through to the core of debates over historical fiction and media adaptation. What’s the use of media like this if it’s not accurate? What fun is hidebound insistence on accuracy when it hampers enjoyment? I hold no answers, and even my own feelings on the matter tend to move with what I’m discussing, but perhaps the greatest value lies in recognizing the problem. If nothing else, it can give you an excuse for trying out some new games.