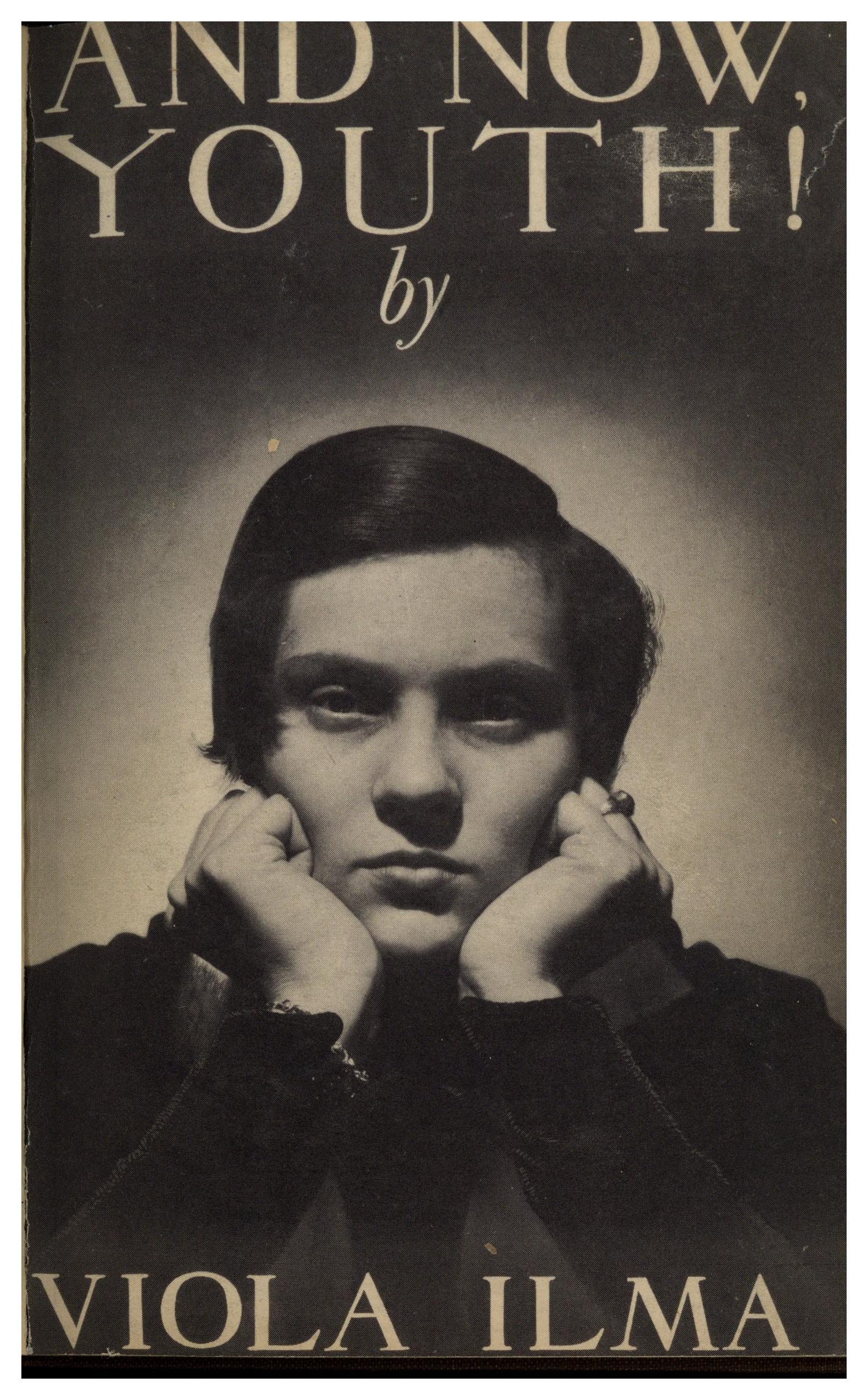 In the last two years, we’ve seen incredible political action undertaken by students and other young people. From the #Resistance to the #NoMore movement, Millennials have found themselves called into action to defend their future against the forces of reaction. Their work is not without precedent; America has a deep but often forgotten tradition of youth activism. When we do remember it, we typically think of the turbulent 1960s, the Berkeley Free Speech Movement, and the protests against the Vietnam War. This tradition goes back even farther, however, with American youth acting as a crucial demographic at least as early as the 1930s. As one young woman wrote at the height of the Depression,“The world is a mess right now, and it is the young folks who are going to pull it out.”

That woman was Viola Ilma, a young New Yorker who sought to capture and embody the spirit of her generation. She was one of those historical figures whose life defies simple description, a remarkable woman who made friends (and enemies) in powerful circles. If her life had been imagined by a novelist, critics might have ridiculed it for being unbelievable. That may be partly why I found her story too captivating to lay aside when I discovered it while working on my thesis.

Ilma was a socialite, a performer, an advertiser, a journalist, a youth activist, a social worker, and—as if I haven’t had enough trouble tracking crypto-communists all year—possibly a Nazi spy . . . all before the age of 30. She was born in 1910 to vocalists who met in Heidelberg while studying abroad. Her father was the son of a Swiss missionary and an Ethiopian princess, while her mother was a Hunter College student born into a German-American family. After high school, Ilma went into advertising since she found it more interesting than college, though her career was soon interrupted by her first trip to Europe with her family where she met famed biologist Julian Huxley.

When she was 21, she appeared in the two-month run of Cloudy with Showers, a Broadway comedy about modern sexuality and an accidental dalliance between a young woman and her professor. Sometimes life imitates art. In 1932, Ilma struck up a relationship with Huxley during his US lecture tour. Huxley flattered and inspired his young paramour, acting as both lover and mentor. On her end, Ilma recalled, “I brought Julian fun, escape, youth, vitality, and a lilt to his life.” The relationship eventually fizzled, however, as both returned to their own worlds and passions.

For Ilma, this meant turning her attention to the problems of youth. Through several journalistic projects, Ilma bore witness to the widespread disillusionment among her generation with the existing American model of democracy and capitalism. “The Voice in The Wilderness to-day is the voice of Youth,” she wrote in her first book, “bewildered and groping in an age so materialistic that money has become an ideal as powerful and as awe-inspiring as God once was.” Millennials could sympathize with many of her complaints: she ridiculed the requirement of prior experience for entry-level work, lambasted colleges as offering poor preparation for modern careers, and lamented how economic insecurity hampered young peoples’ personal lives and social relationships.

During a 1933 trip to Europe, Ilma made stops in Geneva and Nazi Germany. She was appalled by the geriatric leadership, bureaucracy, and traditionalism of the League of Nations compared to Hitler’s vigorous and dynamic new regime. As she explained, “what I wanted was a combination of the strength that had carried Hitler to the top, with the purpose of the League.” She returned from the trip highly politicized, but completely inexperienced in political organizing.

Like many of her contemporaries, Ilma saw youth as the key to the future. Believing that traditional institutions had failed them, Ilma determined that there were three obvious paths to take: “the worn and rutted road of traditional capitalistic democracy, narrowing down steadily to an overgrown cow-path . . . the road of Communism, ending in the concentration of all authority and possession by the state . . . [and] Fascism, with its intense national consciousness and super-patriotic creed.” Rather than adopt any of these established ideologies, Ilma proposed a forth model: “national democracy,” a vision of a corporatist America that rejected both “ruthless individualism” and “an exclusive focus on the state.” Ilma hung her hopes for this new model on Franklin Roosevelt and the New Deal.

With her own worldview set out, Ilma sought to rally the youth of America behind her program. She contacted leaders of national youth organizations like the YWCA and the Boy Scouts about her plans for a nationwide umbrella movement called the American Youth Congress (AYC). Ilma personally secured the sponsorship of some of New York’s leading philanthropists, including J. P. Morgan’s daughter Anne, to fund the project. The Congress held its first meeting at New York University in 1934. Unbeknownst to Ilma, secret members of the Young Communist League had infiltrated the group as members of other organizations and unaffiliated youth. They claimed to represent a majority and demanded the right to vote on officers and procedures different from those agreed upon in advance. They then invited their own speakers, including Earl Browder, chairman of the Communist Party USA. Finally, they denounced Viola Ilma as a fascist planning to use the AYC to weaponize America’s youth as Hitler had done in Germany. Two organizations emerged from the schism: the communist-dominated AYC endured while Ilma’s AYC faded into obscurity.

Despite how she had been treated—or perhaps because of it—Ilma twice ended up in marriages with communists. The first was an ascetic intellectual whose desire to understand and ‘save’ her, a presumed fascist, was matched by her own curiosity in his dedication to communism. Her second husband was butcher who served in the Spanish Civil War and Second World War then moved to Mexico after struggling to reintegrate into civilian life.

One historian has suggested that the communists were right about Ilma’s fascist tendencies. During Churchill’s first visit to the United States after Pearl Harbor, Ilma apparently turned up in Washington and crossed paths with Eleanor Roosevelt who allowed her to stay at the White House. The timing aroused suspicions in the Roosevelt Administration. The administration eventually determined that if she was a spy, then she was more likely to be working for the British than the Nazis. To me, that answer doesn’t seem likely given her apparent lack of ties to Britain, but it certainly seems more likely than a half-Jewish woman from New York City was a spy for Hitler in 1942. Then again, it seems odd that such a woman would have met with Goebbels a decade earlier during her visit to Germany. In truth, Ilma was probably not a fascist, but she was undoubtedly intrigued by the apparent dynamism of Nazi ideology and especially its emphasis on youth identity. She admitted as much in her own autobiography. As it was, she was hardly the only young American to seek inspiration from alternative political models during a decade of democratic malaise.

In 1936, Ilma stumbled into a new career as a social worker. After hiring incarcerated youth as guest editors for an issue of her latest youth magazine, she found herself inundated with requests from young men looking for help securing jobs at the end of their sentences. She characteristically responded by organizing the Young Men’s Vocational Foundation in August 1938 to provide training and living assistance to parolees. At first, she solicited support for the organization from the same philanthropists who had bankrolled her earlier endeavors, but thanks to favorable press coverage the circle of supporters grew much wider. Soon enough, Eleanor Roosevelt herself took an interest in the program. She hosted a White House charity dinner for the group in March 1941 and publicly sided with several of the program’s alumni during a labor dispute. After America’s entry into the war later that year, Ilma launched the Youth Morale Corps to support former parolees who were entering the armed services, providing letters and care packages to young men who would otherwise not receive any. Roosevelt herself took on three as pen pals, eventually inviting one of them to her apartment in Greenwich Village where they had breakfast-for-dinner and discussed the challenges of adjusting to life after prison. After the war, the United Nations Appeal for Children Campaign recognized Ilma’s talent for mobilizing people and recruited her to help promote itself to young Americans.

In the 1950s, Ilma completed an autobiography about her own youth. She described her relationship with Huxley, discussed her various projects and marriages, and drew on the memoirs of repentant former communists to show exactly how they had taken advantage of her “political virginity” at the AYC. She even included a document with questions put to her by the State Department when it sought to take her passport on the grounds that she had connections to the Communist Party. She treated the situation with irony given that young communists had painted her as an archfiend.

A remarkable and active woman though she was, Ilma was no feminist in the modern sense (at least not in the 1930s). While she was not satisfied with constraints of traditional gender norms under the added burden of the Depression, she was a firm believer in the fundamental difference between men and women. She argued that women should not, as she described it, play at being men. Women, she thought, would be happier if they accepted they were configured to be dependent. Notably, she never seems to have followed her own prescription for how women should act and one wonders how long this belief endured through her marriages.

When Viola Ilma died in 1989, the New York Times carried her obituary. It identified her as a writer and noted that she had recently helped found the Friends of Saratoga National Battlefield, illustrating the importance that writing and organizing had throughout her life. (That the Times ran an obituary for her is even more significant when you realize that only one in five people ever profiled in their obituary section were women, a historical deficit that the Times is now endeavoring to correct). She was also remembered as an accomplished stamp-collector who took time to write about and instruct others in philately.

One of the things I’ve especially enjoyed about living in New York is the sense of place this city has to it. As Ilma described streets and venues where she lived and worked, I could immediately imagine myself in relation to the world she inhabited. More than just geography, however, Ilma’s life resonated with me because it intersected with some of the major events, movements, and lives of the 1930s that I’ve been studying all year. Her life is a reminder that our focus on the relevant can obscure the remarkable

Deese, R. S. We Are Amphibians: Julian and Aldous Huxley on the Future of Our Species. Oakland, CA: University of California Press, 2014.

One thought on “Modern Youth, Remarkable Woman: The Life and Times of Viola Ilma”