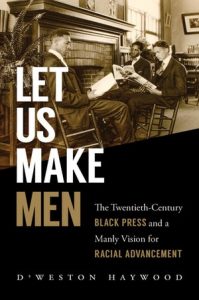 When Heather gave me a couple books that lay outside my normal historical comfort zone this past Christmas, I figured I would ease myself into reading them, lest I lose my motivation and let them fall by the wayside. The first, Aberration of Mind (reviewed here on Concerning History), was familiar in period, if not in subject; this second book, however, was familiar in neither. My fascination with history usually peaks around 1914, and it could certainly use much more non-European focus, I must admit. I was thus both excited and somewhat hesitant to begin reading an academic monograph on the role of the black press in the civil rights movements of the 20th century. Luckily, however, the outcome of reading D’Weston Haywood’s Let Us Make Men was precisely what you want to happen in this situation: strangely compelling and profoundly illuminating.

Let Us Make Men details the lesser known role of the 20th century black press not only in promoting the struggle for civil rights, but also in shaping the narrative and chosen methods of different stages of that struggle. Haywood organizes his work into sub-eras of his selected period, focusing each chapter on one or two key editors and newspapers of that particular stage. From Robert S. Abbot (the Chicago Defender) and W.E.B. Dubois to Malcom X and the Nation of Islam, Let Us Make Men persuasively argues that each black newspaper and newspaperman sought to promote his own vision of the idealized black man, and to rephrase black struggle as an effort to reclaim that manhood (leading in part to the exclusion or erasure of black women from the movement, as well). These visions did not always agree, nor did they exist in harmony; Haywood details no less than three highly acrimonious confrontations between different masculine philosophies in the 1920s, ‘60s, and ‘70s, showing that the black press not only built up civil rights leaders but also tore them down with equal zeal.

Unlike many other works in academia, I found Let Us Make Men to be refreshingly approachable, even for those who have little familiarity with the wider historical events that form the backdrop of Haywood’s narrative. Readers unfamiliar with the Great Migration, Harlem Renaissance, rise of nonviolent resistance, or Nation of Islam will find plenty of explanation herein. Those that are familiar, like myself, but not intimately so, will find a rich re-telling of a generally familiar course of events that lifts back the curtain, shedding light on the inner workings of generations of black activism and rhetoric.

Let Us Make Men may not be a comprehensive history of the black freedom struggle of the 20th century, but it comes admirably close, and closer than it has any right to be as an academic monograph. It has forever changed my perception of its subject matter, and I would highly recommend it to any curious or, quite frankly, even uninterested in so vital a component of recent history. It may not be absolutely vital reading in understanding the Civil Rights Movement, but it isn’t far removed.