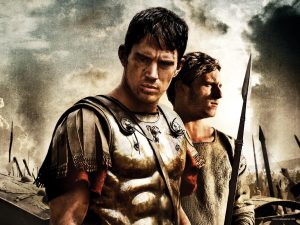 It’s a poorly-kept secret that I love swords-and-sandals movies, regardless of their quality. This is especially true of anything involving legionnaires fighting ‘barbarians.’ While I’ve thankfully moved past (most of) the Roman exceptionalism of my high school years, I still love sitting in a theater and feeling thrilled yet unsettled at confronting the figures lurking in the misty, unknowable forests beyond the edge of the ‘civilized’ world. When I was reminded of the 2011 film The Eagle, then, I couldn’t help but check it out. Though I expected to enjoy what would surely be an over-the-top story, I was surprised by how much I loved this movie historically.

The Eagle opens with a young Roman officer, Marcus Flavius Aquila (Channing Tatum), arriving at his new post at a small Roman fort in Britain. Decades before, the destruction and disappearance of the IX Legion in the far north spurred the retraction of Roman ambitions and the building of Hadrian’s Wall (the disappearance of the IX is a popular myth; it did not in fact disappear, and was simply reassigned to the Persian front). Marcus’s father had led that legion, and Marcus is intent on regaining the family’s honor. Injured fighting a British rebellion and honorably discharged from the legion, he despairs of his chances to do so until he hears rumor that the lost eagle standard of the IX has been spotted north of the wall in a pagan holy site. Accompanied by a native British slave whose life he saved, Marcus embarks on a harrowing journey through unknown terrain and strange peoples to recover Rome’s honor. In the process he must place his life in the hands of one who may know more about the IX’s destruction than he lets on.

Regardless of the not-quite-accurate premise, the historical setting of The Eagle is brilliantly realized. The Roman fort Marcus commands is laid out according to historical regulations, and fighting behind its fortifications is kept to a minimum, with Marcus’s cohort opting to fight in the open field to take advantage of its materiel and tactical superiority. The native Celtic Britons all wear traditional pants and even fight with a chariot or two. Rather than the classical pantheon, Marcus worships the more period-appropriate martial god Mithras, and his legionnaires are even shown marching with the full kit of supplies and tools the Roman legions carried with them. North of the wall, the strangeness of the native peoples is on full display, thankfully without resorting to overly-trod stereotypes. The ultimate keepers of the eagle, the ‘seal people’ of the far north, are also referred to as the ‘painted men,’ a reference to the mysterious Picts of later centuries.

If anything, The Eagle suffers from pacing flaws rather than historical missteps, and the actions scenes thankfully avoid falling into the all-too-common trap of portraying Roman warfare like individual champion combat rather than focused on formations and maneuver. There is even welcome interplay between Marcus and his slave-turned-companion Esca over the brutality of Rome and the lie of its civilizing propaganda, though it predictably ends with Esca, the noble Romanized Briton, joining Marcus against the savage barbarians of the north. The Eagle may not be a masterpiece of historical cinema, but it certainly offers the discerning ancient historian an array of fun details and intriguing atmosphere. If, like me, the mere sight of a legionnaire’s shield or the mention of Hadrian’s Wall piques your interest, The Eagle is well worth giving a try.

Like you, I fell victim to some Roman romanticizing in high school—but I loved this movie! There are some quirks and missteps, but given that the 2015 Nijmegen finds were unavailable, they gave the myth a fair shake. Fun read!

I very much enjoyed this movie, I am glad to hear it is historically accurate as well! Have you by chance seen this version of the Roman v “Barbarian” relationship? https://www.youtube.com/watch?v=GR6Jcp_vYVg