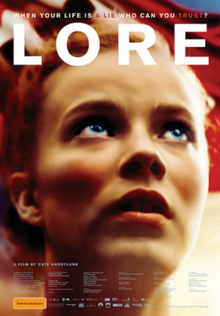 A while back, Heather picked up a DVD of a movie called Lore (German, pronounced like the name Laura). She said it was a favorite of hers and that we should watch it together sometime, but that was about as far as the conversation went at the time; apparently, Lore was a movie. It stared out at me for months from our racks of movies, until finally we hit the sweet spot of mood and time to watch it. What followed was a sobering, unique take on the aftermath of the Second World War that even Heather’s prior explanations didn’t quite prepare me for.

Lore focuses on its titular character, an adolescent German girl, as she attempts to lead her younger siblings to safety as the Third Reich crumbles all around them. These are no ‘innocent’ German children, either; their parents were high up in the Nazi Party, their father was directly involved in some way with the death camps, and Lore and her siblings were all members of various Hitler Youth groups. Left by their arrested parents with only the instructions to reach their grandmother’s house, the children must travel the breadth of Germany alone, struggling to keep themselves alive while coming to grips with what is happening to their country.

Lore exposes a number of intriguing historical themes as it follows its main character’s literal and figurative journeys. I was most struck by its ground-level portrayal of the collapse of Germany in 1945. Upon reflection, American and Allied accounts of the conclusion of the Second World War seem rather neat, yada-yadaing what exactly it looked like to completely conquer a nation-state in the twentieth century. Band of Brothers is a great example: American troops move into Germany, accept some surrenders, find some concentration camps, and police some crossroads until they get to go home. In Lore, the audience sees the traumatic displacement of peoples and paralyzation of infrastructure that occurred as those American troops were moving in.

Lore also brilliantly shifts the perspective of a typical World War II film through its choice of protagonists. For most of the film, Lore and her family are hard-bitten Nazis, completely buying into the propaganda of the party that demonizes not only Jews but also the Allied soldiers invading their country. American soldiers are viewed with extreme suspicion and fear, while Russian soldiers are objects of terror, to be avoided at all costs. Most German civilians behave similarly, and the film makes no attempt to excuse their behavior during the Holocaust; in one town, adults talk in annoyed exasperation about being forced to look at photographs of the death camps while waiting in line for food, as if they’re insulted the Allies would think they cared about the people being killed.

Lore’s flaws are relatively minor and stem almost entirely from narrative, rather than historical, sources. For such a gritty, no-holds-barred story, it is remarkable that the journey of these minors goes as smoothly as it does; it feels like it would be more accurate that they would tragically die and never be found, disappearing like so many must have. There is also some confusion as to the identity of a young man who helps them in their travels. If what he reveals at the end of the movie is true, Lore’s entire rejection of her Nazi upbringing and expectations seems to lack any convincing explanation.

I am very grateful to Heather for introducing me to this film, and I would recommend it to any with an interest in twentieth-century history or unorthodox coming-of-age stories. While it is entirely in German, the subtitles are not intrusive (and much of the film’s weight comes from its actors’ silent performances, anyway). Her initial assessment was spot on, though: one has to be in a very particular mood to watch Lore, lest its bleak and depressing subject matter pull you down with it.