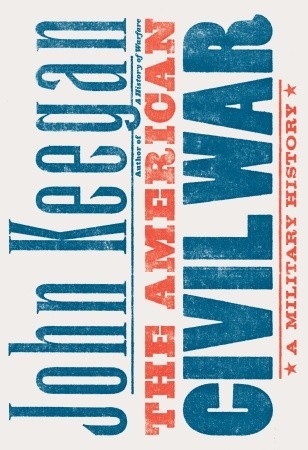 As a fan of John Keegan’s groundbreaking work The Face of Battle, I embarked with great excitement on his last work, The American Civil War. I specifically looked forward to both the trailblazing analysis he would bring to my favorite conflict as well as the relative distance he might have from the oft-romanticized war as an Englishman. Unfortunately, in many ways he appears to have approached the subject with a bit too much distance.

The book’s critical flaw lies in its many factual errors. I’m not just talking about “the Civil War ended at Appomattox”-type nitpicking errors–I’m talking about serious, glaring, and incredibly basic mistakes. Keegan mixes up Ulysses S. Grant and William T. Sherman on multiple occasions, at times even misattributing their quotes. He also regularly confuses the Cumberland and Tennessee Rivers as well as the states of Tennessee and Kentucky. When Keegan reaches the Battle of Gettysburg, he chooses to focus on little else besides McPherson’s Ridge, Little Round Top, and Pickett’s Charge, as if his only source of knowledge on the battle was the film Gettysburg. The book is billed as a “big picture” overview of the war, so from this angle all of these errors and misjudgements could be passed off as relatively minor, more the fault of poor editing than anything else, but the book also suffers from a number of narrative missteps as well.

Throughout the book, Keegan–knowingly or not–asserts as fact a number of tenants of Lost Cause mythology, namely the notions that the Confederacy was doomed from the onset and that Confederate soldiers on the whole fought harder and better but were ultimately overrun by superior Union numbers. In the book’s final pages, Keegan makes it explicitly clear that he subscribes to these myths wholeheartedly: “Unit for unit, and perhaps man for man, the Confederate army exceeded that of the Union in quality, so that the Union triumphed in the end only because of larger numbers and greater wealth of resources” (364). Of course, the South very nearly could have won the war at any number of points during the conflict up to the capture of Atlanta in September 1864, and there is no evidence that Confederate soldiers by virtue of the flag they fought under exercised any advantageous characteristic that made them superior fighting men to their Union counterparts. I had hoped that Keegan’s perceived lack of a personal stake in the conflict as an Englishman would prevent him from making such romanticized claims, but alas.

Keegan acknowledges the Lost Cause mythos and its influence on the memory of the war–devoting a portion of the final chapters to analyzing the effects of Gone With the Wind–but this acknowledgment clearly did not force any introspective reflection into Keegan’s own understanding of the war and its memory. Most dangerously, Keegan dismisses the Lost Cause as “a highly romanticized legend,” noting that “fortunately for Americans, the Lost Cause took the form of a legend rather than a political movement” (345). Keegan clearly is not well-versed in the postbellum history of the American South, else he would realize the absurdity of this assertion. The Lost Cause myth was the raison d’être for the South’s (and part of the North’s) white supremacist regime that prevented the realization of the Civil War’s political ends and that lives on as a source of domestic terrorism and barriers to racial healing and equality today.

All of this being said, there are a few areas where Keegan’s unique interpretation of the war shines through. One of Keegan’s main focal points throughout the book is that of geography and its role in shaping the conflict. His analysis boils down to three main points: 1.) The Appalachian Mountains prevented armies raised from the population centers of the Midwest from easily invading the coastal Southern heartland; 2.) Rivers flowing easterly off the mountains into the Chesapeake offered natural points of defense for the Confederacy to block Union advances towards Richmond; 3.) Western rivers served as highways for invasion for Union armies west of the mountains (even though at one point Keegan mistakenly describes the crucial Mississippi as a barrier rather than an avenue for these advances). While these points are hardly ground-breaking realizations, they represent a driving force behind Keegan’s assertion that one of the uniquities of the American Civil War was the degree to which geography shaped the course of the conflict, perhaps more so than most wars.

As predominantly a scholar of European military history, Keegan also succeeds in his comparisons between the Civil War and other contemporary European wars. Keegan brings insightful analogies to Napoleonic, Crimean, and First World wars while also analyzing how Jominian military theories clashed with tactics and strategy taught at West Point before the war as well as how those differences in theory played out on the battlefield. Keegan also shows deference to how the concept of a decisive victory played into Union and Confederate strategy early on, but was ultimately undermined by events in the field. Similarly, Keegan notes the legacy (or lack thereof) of the American Civil War on military thinking in Europe. In a surprising–yet uniquely insightful–twist, Keegan closes the book by relating the war to nascent labor unrest elsewhere in the world: “American socialism was stillborn on the battlefield of Shiloh and Gettysburg” (365). According to Keegan, it was both the revolutionary nature and horrible brutality of the war that helped prevent the rise of socialism that would overtake or severely threaten–often violently–nations across Europe in the late nineteenth and early twentieth centuries.

All told, I would almost recommend Keegan’s work as a good primer for anyone looking to take their first dive into learning about America’s bloodiest and definitive conflict. Keegan summarizes the main elements of the war, from its antebellum origins to its main decision points, quite succinctly and accessibly when compared to other works that can seem daunting in their scope. Moreover, Keegan’s unique European and military theory background give him interesting perspectives on a war that has been written about seemingly ad nauseum. But ultimately his inability to get even the most basic facts right as well as his historiographically dangerous flirtations with Lost Cause mythology sink this initially promising work. It is rather a shame that this book would ultimately be John Keegan’s last. Simply put, it could have been much, much better.