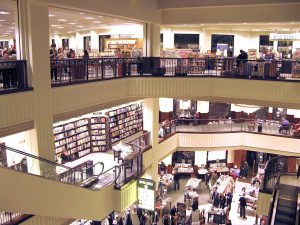 History sections in American bookstores are small, almost pitifully so. My favorite bookstore in Oxford, Blackwell’s (not coincidentally J.R.R. Tolkien’s favorite store, as well), devoted almost half a floor to history. In contrast, the Barnes & Noble Heather and I visited on Saturday gave perhaps a third of that space, which is generally representative. If subject matter had still been equally distributed, I may not take much issue, but absolute space is only the tip of the iceberg. As many of you may know from my other posts here on Concerning History, my historical interests are…varied, to say the least. So when I look for books on comparative empires or early medieval archaeology or the Borgia papacy (foreshadowing for a future review, anyone?), I am increasingly irritated that bookstores routinely relegate all of these subjects to a section, usually called ‘World History,’ that only makes up perhaps twenty percent of the history section. The remaining eighty percent is devoted to just two subjects: United States (not even wider American) history and military history. Ancient/Classical history, which at Blackwells receives an entire floor-to-ceiling shelving unit, in the US receives rarely more than a couple  of individual shelves, often with many of its primary sources located in other sections (Homer and Virgil, for example, can be found in Poetry, which both does and does not make sense to me).

On the one hand, this is understandable and predictable; Americans want to read about their own history. English history was by far the largest section at Blackwell’s, a state of affairs that suited this student of the British Empire just fine. On the other, though, Americans are often rightly accused of being isolationist or exceptionalist in their historical viewpoints; such topic distribution does not help, and may even contribute. I can’t help but wonder what other questions and problems might stem from or influence, in whole or in part, problems of public history and historical memory that historians decry. Can we be surprised when NPS visitors show no interest in ‘civilian life’ tours when the majority of history books on display in bookstores are military history of some kind? What does it convey to non-white members of our society when black, Native American, and Latinx histories are filed not in the history section but in the ‘ethnic studies’ section, implying that their stories are not really ‘history’?