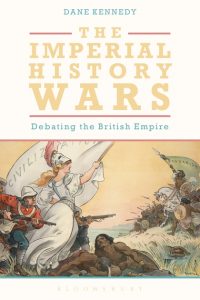 “The History Wars.” It sounds like the title of some new science fiction show, one with undoubtedly cheesy special effects and horridly inaccurate costuming. In reality, the History Wars are much less exciting. Originally coined in Australia in the 1990s to describe debates over the existence of a colonial genocide of aboriginal peoples, this phrase has come to encompass all such contentious debates over history and memory that have spilled over into the public sphere in recent decades. Imagine my delight, then, at receiving Dane Kennedy’s The Imperial History Wars as a birthday present this past March. I eagerly dove in, anticipating controversies and arguments galore related to my specialty. In place of war, however, I was greeted unexpectedly by a cogent little discussion of the state of British Imperial history as a field of study.

Kennedy’s book is a collection of ten essays and articles, yet only the last two chapters deal with contentious issues of remembering and assessing the legacy of the British Empire. The rest take a decidedly more academic focus, discussing the turbulent historiography of the British Empire during the second half of the twentieth century. From debates over post-colonial history to comparisons between British Imperial and American international power, Kennedy serves as the reader’s guide through the numerous changes that have reshaped imperial history from its stodgy Oxbridge beginnings to one of the most vibrant and volatile historical fields today. Many of these early chapters put me in mind of my seminars at Oxford, and indeed The Imperial History Wars would serve as a phenomenal primer for those wishing to begin more serious studies in the field. Not only does Kennedy efficiently summarize the changing state of the field, he does so through a reading list of the past three decades’ luminaries in imperial history’s many sub-disciplines.

As an historiographical survey, The Imperial History Wars succeeds spectacularly; as anything else, however, it falls a bit short. All of Kennedy’s prose is presented through the lense of others’ works, and what analysis exists is simply about the impact a certain publication had or the ways in which new ideas are making waves. Even Kennedy’s final discussions about the contested memory of the British Empire rely on the writings and actions of others and contains no attempt to historically wrestle with their claims. Kennedy can at times seem aloof from it all, refraining to identify which historiographical schools he belongs to or has subscribed to in the past. The discerning reader is left to wonder whether some of these schools may deserve more credit, or at least possess more nuance, than Kennedy gives them.

While it may not have quite lived up to the promise of its title, I did thoroughly enjoy this short romp through the way British Imperial history has been written across the past sixty years. For any just starting into this daunting field, I highly recommend The Imperial History Wars as a convenient jumping-off point, full of signposts and recommended reading. For those interested in a more general history of the British Empire or its legacy, I’m afraid you should look elsewhere.