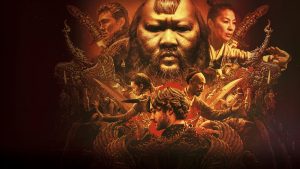 Let’s be honest with each other for a minute: our historical movies and television in 2018 are still overwhelmingly, almost-hilariously, Eurocentric. Indeed, at least half a dozen of the shows on my (long, long) list of things to watch focus on the English/British monarchy alone. When I learned of Netflix’s drama recounting the travels of Marco Polo through Central Asia and China, then, I couldn’t wait to try it out. Sure, it would still be somewhat Eurocentric, but at least some underserved regions and periods of history had the possibility of being fully realized onscreen. Towards that end, my hopes would prove to be realized in full.

This show may be named for the famous Italian explorer Marco Polo, but this is in fact highly misleading. Yes, Marco is the main character of the show, and yes, he serves as a white/European entry point into another culture, but the story does not explicitly focus on the events of his famous travel narrative of his experiences. Certain allusions to those events appear now and then, but the real focus of the show is the politics and wars of the Mongol Empire under Kublai Khan in the late thirteenth century. From the efforts to conquer southern China under the Song Dynasty to the numerous plots and plans within the royal family, Marco Polo brings the Game of Thrones treatment to the greatest land empire ever to exist. The cast, thankfully, is laudably diverse, filled almost exclusively with Asian actors (the only exceptions being the Polo family and, later, some crusaders that enter the fray in Central Asia). Benedict Wong in particular is magnificent in bringing the great khan to life, and the story even takes into account the wide range of peoples subject to the Mongols, with multiple Muslim characters from across Asia.

The manner of this story’s telling, however, will be the sticking point for many potential viewers. On some level, there must be a strangeness to the Mongol court when seen through the eyes of a visiting European in the Middle Ages, but the strangeness can at times too easily fall into tired tropes of sexual deviance or Eastern mysticism. Combined with the explicit gore and sex that comes with the Game of Thrones treatment (indeed, the show was originally developed for fellow premium network Starz), Marco Polo can be an extremely objectifying show. There is also the unique decision to make large segments of Marco Polo a kung fu/martial arts show, which could drift over the line of eastern caricature for some. For others, this results in awesome, over the top action sequences that enliven an otherwise slow story (and give the best, most accurate portrayal of functional chainmail in combat I have ever seen).

When all is said and done, Marco Polo is a highly individual choice. While it is gratifying to finally see the Mongol Empire on screen, its many disparate storytelling choices may leave some viewers enthralled and others appalled. My only recommendation can be to try it out and choose for yourself.

One reply on “At the Court of the Khan: Netflix’s Marco Polo”

What most impressed me about this show was the casting. Obviously, having the majority of the cast be Asian actors playing Asian characters is laudable (as depressing as that statement is); but I was also happy to see that an Italian actor was cast to play Marco Polo rather than a b-list British actor with an affected accent.