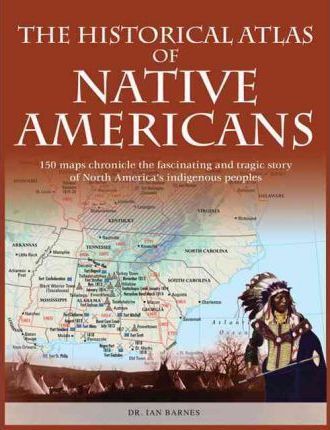 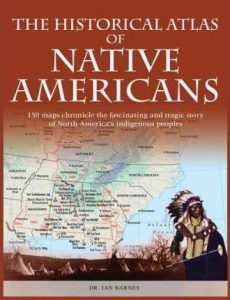 I admit, this seems like a strange choice of book to review. What can the possibly be to say about an atlas? Ian Barnes’ Historical Atlas of Native Americans, however, is more than simply a collection of maps; it is a general overview of the history of Native Americans from the Stone Age to the present, illustrated with artifacts, drawing, paintings, photographs, and, of course, maps. These elements, coupled with the intriguing state of being authored by a white, British, academic, called for reflection on their execution.

But first, the maps. They are many, and they are glorious. I initially obtained the atlas precisely for the cartographical resources contained within, and I was not disappointed. 150 maps lurk within its pages, and provide a multitude of resources to help geographically visualize the history of America’s indigenous peoples. The core of the narrative that makes sense of them is competent enough, as well. Barnes is suitably evenhanded when covering the multiplicity of histories involved in his topic, and is always careful to note differences in tribal identities and involvement (though this does at times result in barely readable list-sentences). Coverage of pre-European contact is particularly comprehensive and up-to-date with modern scholarship, and the decision to also discuss the history of Native American communities over the past century is admirable as well as informative.

For all its value, however, Barnes’ work is plagued with regrettable flaws. Chief among them are the choices taken in his narrative’s telling. While Barnes provides an excellent survey of pre-Columbian Native American cultures, as mentioned above, the driving force of history is snatched away from Barnes’ reputed subjects as soon as the first European contact is made. This turns much of the Historical Atlas into simply a retelling of American history, just with more care taken to include indigenous peoples on its maps. This may to a certain extent be unavoidable, and is itself a vast improvement over older histories that trended overwhelmingly towards erasure, but I still look forward to a history of America’s native peoples wholly in their own right. This flaw of agency is compounded and indeed aided by Barnes’ decision to focus nearly exclusively on traditional political and diplomatic history. Early descriptions of Native American arts, culture, and lifestyle are not developed again until receiving their closing summaries in the modern era. So too is the choice of geographical coverage an enigma in the Historical Atlas. What passes for its subtitle makes clear that the work’s scope covers only North America, yet Mexico and Mesoamerica are completely forgotten after the Pueblo Revolt of 1680, and indeed the Aztec Empire and its conquest receive no coverage at all. Canadian peoples receive a bit more attention, but Barnes’ work is mainly just a history of the Native Americans who lived within the boundaries of what has become the continental United States.

Despite its many flaws, Barnes’ Historical Atlas is a refreshing step forward in the treatment of American history. For any student of American or indeed world history, it and its maps serve as a striking reminder of the vibrant diversity of cultures, actors, and stories that populated the North American continent before, alongside, and in conflict with European peoples. As with any such history written by a European, there remains much room for improvement (for example, refraining from using highly problematic racial terms like Indian, Eskimo, and Sioux), but Barnes has certainly made a worthy effort. Whether looking for visual resources or a general history of North America’s peoples, The Historical Atlas of Native Americans is certainly an accessible place to start.

One thought on “Not Quite, but Getting There: Ian Barnes’ Historical Atlas of Native Americans”