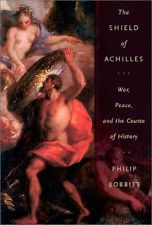 Bobbitt, Philip. The Shield of Achilles: War, Peace, and the Course of History. New York: Alfred A. Knopf, 2002.

I’ve been fascinated with the small European wars of the eighteenth century for years, and writing my post from earlier this week on the continuity of total war (found here) gave me an occasion to brush up on that material. Accordingly, I dove into Philip Bobbitt’s formidable work The Shield of Achilles. Integrating the studies of state formation and warfare in early modern and modern Europe, Bobbitt demonstrates the ways in which states’ constitutions (here the general manner in which a state is constituted and governed, not the formal documents) and strategies (loosely, the manner in which states wage war, rather than specific war plans) are intertwined, influencing each other and driving to different forms and heights. In so doing, Bobbitt attempts to argue for a certain dialectical view of history that, incidentally, results in his own prognostications on where the modern world is headed and the ways in which we should respond. I have never simultaneously loved and despised a book more in my life.

I set out to read The Shield of Achilles for this history it covers, namely the wars, peace settlements, and international orders of Europe from the end of the fifteenth century to the present. In this, Bobbitt excels. Rather than getting bogged down in endless details of campaigns and engagements and treaty articles, he deftly follows his chosen themes in explaining how the changing demands of war in the fifteenth century led to the formation of the modern state apparatus in the Italian city-states. Subsequent conflicts continued to change the response and form of states, while those same evolving  states in turn modified the ways in which they fielded their forces and won (or lost) their wars. Bobbitt’s treatment of international organizations is equally insightful, noting that these orders operate similarly to the principles of intrastate constitutions and are formed from the peaces following great wars in an attempt to prevent future ones. His vignettes of notable law theorists concerned with the definition and application of international law are also welcome in both illustrating the views of their periods and initiating the reader into some of the niceties and crucial conundrums of the topic. Throughout, the interplay of strategy, law, and history are supremely evident and endlessly fascinating. Less fascinating, however, is what Bobbitt does with it.

Bobbitt is not an historian by trade but a political scientist, and as such only uses his treatments of history to inform his own framework for the present day. Instead of simply demonstrating the role of the warfare, the state, and the international community in each others’ evolution, Bobbitt classifies each stage in this evolution in a series of formal, restrictively defined typologies. These typology states superseded each other after long, ‘epochal’ wars (decades of related conflicts in the manner of the Thirty Years or Peloponnesian Wars), the peace conferences of which imposed the assumptions of the triumphant typological order on the international community of states. Bobbitt’s categories might not be so objectionable if they were less chronologically rigid; as it is, the progression of princely, kingly, territorial, state-nation, and nation-state structures seem to take an idealized form of a single contemporary state and project its principles on to all others while denying those features’ existence before or after that typology’s allotted span. Even the distinctions between them are muddled. ‘State-nation’ and ‘nation-state’ are a particularly perplexing example. Created by Napoleon, Bobbitt’s state-nation mobilizes the nation in service to the state, while the nation-state serves the interests of the nation. I originally took this to be an astute distinction between democratic nation-states and nationalist monarchic/authoritarian regimes, but this was not the case; Bobbitt clarifies that a nation-state need not be representative, and that the first were the United States after its civil war and Germany under the Kaiserreich. Bobbitt simply ignores that democracies and states born from popular revolution like the US, Britain, or the French Republic are drawn from the nation, and thus can only be considered a nation-state. As far as I could tell, Bobbitt’s distinction puzzlingly turned on the existence of welfare laws and policies, but ‘welfare state’ is already a well-documented term that is wholly irrelevant to his line of inquiry. Other factors external to his typologies are also problematically ignored; the European blue-water empires and imperialism generally are absent, only being mentioned as  phenomena unique to the state-nation when they in actuality spanned all five state forms (and provided plenty of overlooked influential warfare). Bobbitt ‘s dialectic paradigm concluded in the grand claim that the period 1914-1990 should be considered one long epochal war, deciding whether ‘parliamentarianism,’ fascism, or communism would prove to be the most legitimate form of nation-state governance. Even a cursory study of the period would reveal this as a projection of the ideological conflict of the Cold War onto dissimilar events in search of non-existent continuity; in any event, it is thoroughly unconvincing. Explaining his rigid definitions in a postscript, Bobbitt claims that this was a result of examining his material with so much hindsight, and that critical and knowledgeable readers will likely think of all manner of exceptions and counterexamples. Aside from flouting basic principles of responsible historical research, such a sentiment begs the question of why he bothered to argue those definitions in the first place.

Bobbitt’s arguments themselves are not the only problem with The Shield of Achilles; the very framework with which he approaches his subject matter is deeply flawed. This a book that could only have been written by a white man, and a well-off one at that. To call The Shield of Achilles Eurocentric would be an understatement. This would be fine if Bobbitt professed only to deal with the formation of European states, but he claims a more universal mandate. In another postscript, he obtusely explains that this is due to the modern state being a uniquely European invention that only spread to the rest of the world in the twentieth century. If absolutist France or Russia or Spain qualify as states, however, China, Japan, and the Ottomans surely do, not to mention earlier possibilities such as Persia or Rome. Not only are these contemporary (and in some cases much more advanced) states never used as a comparison, they aren’t even mentioned. Even once modern statehood has supposedly spread across the world, Bobbitt uses and reuses the same few examples as cogs in his projections, not for any meaningful discussion in their own right. Even more fundamental is the distressing lack of any human agency in Bobbitt’s writing. “Inevitable” is his favorite word whether he is talking about the failure of the Treaty of Versailles or the existence of war itself, which is anathema to my own principles of responsible history. This goes hand in hand with his problematic treatment of the institution of the state itself. Though he insightfully locates the origins of the modern state in the creation of a body politic separate and more permanent than simply the reign of a single ruler, he seems to take this principle over the edge of reason.  His description of the actions, purposes, and behavior of states portray them as some kind of completely separate, robotic, non-human entities that act with ahistorical sense of determination and purpose (which can only be written as such through reading history backward). Bobbitt seems to forget that states are human organizations: they do not exist without actual people to fill their positions and bureaucracies, and are therefore subject to human wills and faults and inexplicable decisions. Perhaps this is how he can naively write that a market-state (his latest and current in the line of typologies) could be expected to eliminate racism and other prejudices simply through the laws of the market. Perhaps most frustratingly, Bobbitt regularly contradicts himself on every topic he analyzes, not only providing irreconcilable definitions but at times lucidly discussing principles (like human agency and unpredictability in history) that he has blithely ignored for the entirety of the book.

For all these (and many more) flaws, The Shield of Achilles is still a remarkable work of history and political science. Just when you feel ready to throw it against the wall, Bobbitt will surprise you with a fragment of incredible insight, and his six prospective ‘future’ scenarios are entertaining reading, if a bit worryingly circumspect (violent tendencies being detected through genetic scan at birth; biological viruses spread through the internet). One thing is for certain: you will not readily forget The Shield of Achilles, if only due to a myriad of unresolved arguments with its lingering specter.

2 replies on “Failure of Analysis: Philip Bobbitt’s The Shield of Achilles”

As I tried to find my own way through Philip Bobbitt’s The Shield of Achilles, I wondered what other readers had made of it–and came across your comments, which capture the appeal and frustrations of the book. I’m grateful for this introduction to your own writing (and this website).

So glad you found us, Carol! This remains one of my favorite reviews, and it’s good to know I’m not the only one who felt this way.