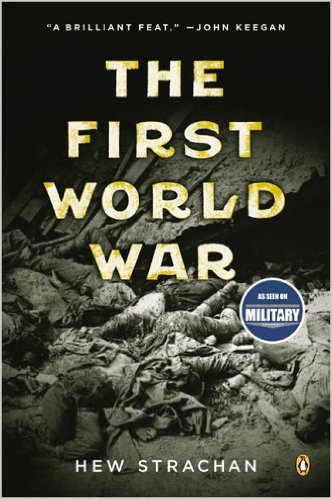 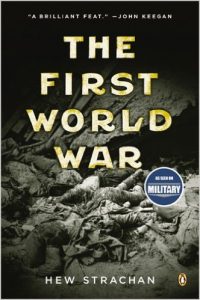 The mud-filled fields of Flanders and poems such as Wilfred Owen’s “Dulce et decorum est” fill popular imagination about the First World War, the cataclysmic conflict fought between the empires of Europe for continental hegemony and the security of their empires. Much is made of the First World War’s apparent futility, the needless waste of life on the battlefields of the Western Front, and the seeming incompetence of military and political leaders on both the sides of the Central Powers and the Entente. Hew Strachan, however, in his defining short-history of the war, boldly demolishes this concept of the war. In his new and updated introduction for the centenary of the war, Strachan makes clear that the popular memory of the war as a futile and senseless confrontation fought on the Western Front ignores the truly global scale of  conflict and ignores the ideas, perspectives, and motivations of the leaders who orchestrated the armies that prosecuted the war, the soldiers who fought in it, and the people who endured the war at home. This was a conflict fought for the security of Europe on the one hand and to redefine the world order in the image of a German worldview on the other. It was fought to curb German militarism and challenge British naval supremacy. It was fought to secure nationhood for colonized peoples and preserve large multi-ethnic empires in the face of ethnocentrism and nationalism in Europe. It spread nationalist ideas and laid the groundwork for anti-colonialism across the world. It laid the foundations for modern conflict in the Middle East. As Strachan contends in his conclusion, “[i]n short it shaped not just Europe but the world in the twentieth century. It was emphatically not a war without meaning or purpose” (340).

Strachan’s book is first and foremost a narrative. It tells the story of the war and provides analytical insights within the context of the war’s  broader story. For those interested in an introduction to the major events and decisions that gave shape to the conflict, this is your book. As a historian without much expertise in the conflict myself, I found the book eminently readable and I was able to follow the stories of the large cast of characters who defined the commands and leadership of the global conflict. This work is a political and military history, so much weight is given to the thinking and writings of monarchs, politicians, generals, and their staffs. Where the experiences of ordinary individuals come to bear, it is to substantiate or illumine contours of the conflict not gleaned from the writings of the leadership. This is not a renewed version of John Keegan’s The Face of Battle. Large swaths of historiography, analysis, and the social history of the war for the common soldier or the ones at home are condensed into pages or paragraphs.

Strachan’s writing clearly shows that he has a command of his subject and of the intimate details of battle reports, staff records, diaries, censuses, and all manner of official records that catalogued the war and its impact. One of the most staggering and impressive parts of the book is Strachan’s ability to wield statistics with incredible ease to show the scope and penetration of the conflict into all avenues of people’s lives. From estimates on the number of people impacted by the British blockade of the Baltic and the North Sea to the frequent fluctuations in Russian troop numbers at the front, Strachan’s research proves that this was a war of numbers, materiel, and logistics as much as it was tactical innovation on the battlefield. In addition, by organizing the work thematically, honestly the work’s greatest strength, Strachan introduces new developments in the war within a global context. Thus, the section entitled “Revolution” not only tells the story of the Russian Empire and Lenin, but also of revolts in Austria-Hungary, mutinies in the French army, the collapse of the Italian military, and the famous Arab Revolt against the Ottomans.

Despite its narrative and detail-oriented approach, Strachan does not shy away from analysis, though it is couched within the larger story. He is ever the apologist for the command decisions of leaders on both sides of the conflict across the globe, using the contexts of particular situations and the circumstances surrounding information at the time events occurred to make logical conclusions about what commanders knew and how that impacted their decision making. Strachan’s contextualized rendering of Sir Douglas Haig is not that of a bumbling idiot who ordered men to their senseless deaths at the Somme, but rather that of an experienced commander from colonial wars in the British Empire struggling to adapt to a tactical situation in Europe without the necessary resources or information to do so effectively. France is not the great defender of liberalism against German militarism, but rather a government in such political chaos that its generals were able to command and control national policy and the army for the first half of the war with impunity.

Where Strachan could have spent more time in his narrative is in his analysis of the ideas that shaped the conflict. As his argument contends that the war was not without purpose or consequence, as it did indeed shape the world of the twentieth century, Strachan could have spent more time articulating how the ideas of the conflict explicitly evolved from 1914 to 1918. While the reader does see Germany’s strategy as one to create a new world order aligned with its national interests and desire for cultural and economic expansion, Strachan does not delve into as much detail as such a policy warrants. Moreover, the political and intellectual conversations surrounding the war are secondhand to the conversations and tactical decisions of generals. Thus, while it is important that the innovations of tactical warfare on the western front or the decisions by both the Germans and the British to try and leverage enemy populations to rebellion or revolution are told, I found myself wanting to know more about the ideas behind such initiatives. Why did the Germans not fear that exploiting religion and Jihad in the Muslim populations of the British and French Empire could also lead the Allies to exploit the Catholic populations of Austria-Hungary and Southern Germany against the militant Protestantism of the Prussian-dominated German war machine? Did the British fear that exhorting Arabic tribes in North Africa and the Middle East to rebellion against the Ottomans could create a precedent for Dutch Boers in South Africa or the people of India to also demand independence through rebellion? How did British thinkers and leaders reconcile their own alliance with Tsarist Russia and a chaotic French Republic as they claimed to fight for liberalism and its spread on the Western Front? These ideological questions were not at the forefront of the narrative, but their answers would have greatly enhanced the argument Strachan was trying to make.

Due to a lack of depth with the ideological and intellectual side of the war, Strachan’s conclusion felt rushed. The problems and controversies surrounding the war’s concluding treaties, primarily the Treaty of Versailles, are given only a few paragraphs. This, to me, seemed inadequate to dispel the large misconceptions Strachan noted in his introduction. The Treaty of Versailles was used as a casus belli by Adolf Hitler twenty years later and has been cited ever since its inception as an unfair treaty. Strachan points out that the treaty made promises that it could never hope to uphold or fulfill, but did not go into detail about those promises and why they were flawed other than to point out how nations such as Italy and Japan backed away from the League of Nations in subsequent decades.

Despite these flaws, which overall are minor in comparison to the goal of the work, to tell the story of the First World War, I highly recommend Strachan’s work for all readers. As we approach the final year of the war’s centenary, pick this book off the shelf at Barnes and Noble or the local library and dive in. While the tactical and detail-laden sections about continuous battles in the Balkans, the Western Front, or the Middle East may be a bit daunting, the intertwining narratives of the book, and that of the war, fit cohesively with one another. The beauty of this book therefore lies in the story it tells and the questions it raises. Because Strachan did not answer all of my questions, or only scratched the surface of some, the end result of the book’s limitations is my own burgeoning curiosity. And that, in and of itself, is good.