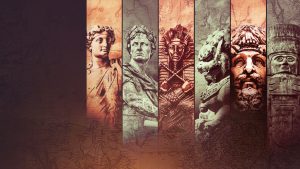 When we saw a new show air on Netflix, we both eagerly messaged each other with the news. The show was Empire Games, and its premise of telling previously unknown histories of ancient empires was right up our alley.

Not long into our respective first episodes, we felt profoundly betrayed. To quote a character from one of our favorite shows, this “secret history” should really be called “the history everyone already knows!” Empire Games was simply retelling the stereotypical, middle school textbook stories of the most well-known empires of the ancient world. Its recreations were woefully low quality for 2018, not to mention every line of narration, from primary source excerpts to translations of non-English speaking scholars, was performed by the same narrator…using different voices. The further we got, the worse it became. Indeed, there’s so much to critique about this trainwreck of a show that we broke it down, episode by episode, to collect all of our thoughts.

Roman Episode, or, See How Much Rome was Like Game of Thrones, Guys? See?!

In its first episode, Empire Games tells the story of the most famous empire of the Western world: Rome. It follows the stories of the Julio-Claudian dynasty, beginning with Augustus and ending with Nero, in only an hour, making every effort to sensationalize Rome’s bloody and scandalous politics at every turn in what felt like nothing more than an attempt to draw parallels between history and HBO storytelling. It’s a compelling story in its own right, certainly, but I, Claudius did it better. Plus it had Patrick Stewart with hair!

Greek Episode, or, We Just Wanted to Talk About Alexander but Took 60% of the Episode to Get There

As soon as I saw that the second episode was on Greece, I was cautiously optimistic for what I was sure would be a discussion of Athens’ maritime empire at the time of the Peloponnesian War. I’m a slow learner. Instead, we were treated to a mishmash of all of Greek history, jumping from the Homeric epics to the Persian Wars, inexplicably skipping all the juicy empire of the aforementioned Peloponnesian Wars, before finally settling on Alexander the Great in what felt like the goal of the episode all along. Also, they showed a shot of Minoan Knossos when talking about Classical Athens and an eighteenth-century warship in a recreation of the ancient naval battle of Salamis. We have no words.

Egypt Episode, or, We Don’t Know How to Organize a Story

The person who wrote the script for this episode should never be allowed near a keyboard again. This labyrinthine hour of television began with the New Kingdom pharaoh Akhenaten, then rocketed back a millennia to discuss the origins of the pyramids, before zooming forward to talk about Rameses III and his fight to preserve Egypt during the Late Bronze Age Collapse, all without telling the viewer about the time changes or proper chronology of ancient Egypt. We also found it inconceivable that, in a show supposedly about empire, they only gave lip service to Egypt’s greatest personality and empire-builder, Rameses II.

The episode on the first Chinese empire (really more on the first emperor, as these stories too often go) begins with an overuse of the term “civilization” thrown around like it might have been thirty years ago in a way that left us feeling slightly icky. Combined with an oddly moralistic fixation on China’s return to the teachings of Confucius after Qin legalism and a horribly uncritical representation of ancient sources that talked of piles of skulls and starving parents eating their own children, the themes of this episode left us with a feeling of vague unease at its presentation.

Celts Episode, or, What Even are Definitions?

Ah, the episode that threw definitions out the window and ignored the premise of its show to…do…something? If ever the term ‘Celt’ could be considered historically useful, it would be to describe a large cultural group in Iron Age Europe, but Empire Games devotes an entire episode to “the Celts” like they were one large polity or formal confederation, even coming close to calling them a formal empire in competition with Rome for dominion over Europe. It also ignores the existence of the equally general cultural grouping known as the ‘Gauls,’ which is how the Romans and other Mediterranean societies would have known most of the peoples discussed in this episode.

Mesoamerica Episode, or, We Just Couldn’t Resist Making Half this Episode About the Spaniards

In what we can only assume was an effort to expand beyond usual Old World-centrism, Empire Games’ final episode pivots to Mesoamerica, beginning with a discussion of the Aztecs and their forebears. We admittedly aren’t well enough versed in the history of that empire to comment on accuracy or interpretation, but we were aghast when, without even attempting to discuss the Olmec, Maya, Cahokia, or even Inca, the episode turned to a discussion of the Spanish conquest of the Aztec. Perhaps in some misguided effort to ameliorate this travesty, one talking head seriously peddles some kind of noble savage myth that the Aztecs were “much more developed” than Europe at the time.

It took all the willpower we had to make it through this travesty of series, and unless you have a thing for historical masochism, we recommend you stay far away. Each of us can recommend numerous books on any of the subjects covered therein, all of which would serve you better in accuracy and entertainment.

4 replies on “Read a Book Instead: Netflix’s Empire Games”

I watched literally sixty seconds of this show and turned it off. Wow, it was bad. You were brave to stick it out.

Bwhahahahaha! Thanks for the heads up! I’m notoriously apprehensive about history “on television,” and likely wouldn’t have even made the click. However, I truly enjoyed the episode by episode critique.
I’ve been sick for weeks.
Haven’t laughed this much forever!
Thanks!

How hard is it to look up the PROPER PRONUNCIATION of the names of well-known characters from antiquity?
Case in point: Rameses = Ram-uh-seez, not Ram-seez. Ugghh!!!

Worst history program on TV and, hoping in vain that it would get better, a total waste of time. Most of the ruins shown in the Aztec segment were Mayan.The narrator not only, and frequently, mispronounced names, but mispronounced them differently within the same segment.