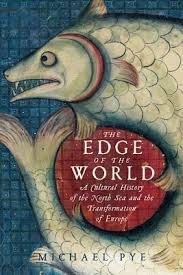 Pye, Michael. The Edge of the World: A Cultural History of the North Sea and the Transformation of Europe. New York: Penguin, 2015.

If I had a dollar for every time someone claimed to be writing a book about an “unknown,” “overlooked,” or “forgotten” period of history, I would be a very rich man. So often, these periods really aren’t that underserved, and we’ve even at times considered putting together a post listing the most regularly talked about “forgotten” periods of history. When I came across Michael Pye’s Edge of the World, however, I thought I had hit the jackpot. I have a soft spot for histories of the early Middle Ages (sometimes known as the Dark Ages), and few periods of history can claim more accurately to be unknown, as we must work from scarce written sources and physical evidence to reconstruct an elusive historical narrative of Europe’s rebirth after the fall of Rome. Even better, Pye promised to focus on a region lesser known in this period; rather than look for clues to our modern world in the court of Charlemagne or the remnants of Rome, Pye casts his gaze out into the cold world of the North Sea. Baited with prospects of a world system history of the North Sea in the early Middle Ages, then, I was practically salivating to begin reading. While entertaining, however, Edge of the World would fall far short of my lofty hopes.

For better or worse, I am uniquely qualified to criticize Pye’s scholarship. My masters work at Oxford involved copious work in world systems and global historical methodology, and while there I had the pleasure of taking a seminar in the early modern world. I can state with utmost confidence, then, that Edge of the World is in no way a history of the North Sea world system at any stage of its development. Pye instead jumps around the rim of Northern Europe, here discussing Scandinavia, there discussing Holland, whenever a relevant development takes place. It quickly becomes evident that Pye’s real intention is telling how a recognizably modern Europe developed out of the ashes of Rome, and that he wishes to restore Northern Europe’s place of importance in that development. This seems to stem from some conception that the Renaissance has attracted the majority of attention in this regard, and Pye does state that he wishes to add to conversation rather than supplant it, but no serious academic has pointed to the Renaissance or southern Europe as instrumental in building the modern world in any way other than artistic tradition. Indeed, claiming to tell an untold story before then devoting large swathes of your writing to the Vikings and Dutch proto-capitalism is disingenuous at best and blithely ignorant at worst. Edge of the World can also never seem to escape the shadow of Rome, and however much Pye might protest that the Dark Ages is a misnomer, his subject peoples seem to be re-discovering quite a number of concepts that had been widespread before Rome’s collapse.

While Pye’s stories may not exactly be groundbreaking, he certainly tells them engagingly. As my above comments indicate, serious historians will likely be underwhelmed by Pye’s work, but those looking for a general, engaging introduction to the transition from medieval Europe to early modern Europe will likely enjoy Edge of the World immensely. Pye’s style of anecdotal introductions to his topics provides lively and fascinating snapshots of life in northern Europe throughout the periods covered, and his primary sourcework shines through. While I may not have found what I was looking for, Pye has certainly delivered a nice gateway into the fascinating history he examines. I can only hope that its readers pursue their curiosity into more serious fare, rather than stopping short at this threshold.