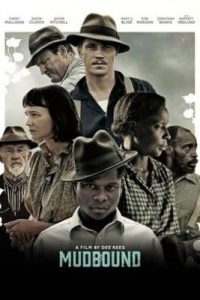 A couple months ago, a trailer for a Great Depression/Second World War period drama debuting on Netflix caught our eye, and Mudbound was duly put on our list to watch. Despite a (fortunately) aborted idea to watch it on New Years Eve with Bryan’s parents, we did eventually get around to watching this frank portrayal of Southern racism and poverty in the wake of the Second World War. Though we enjoyed its coverage of less-trod historical themes, we were kept from really loving Mudbound by its thoroughly predictable story.

Mudbound tells the story of two families in rural 1940s Mississippi, the white McAllans and the black Jacksons. Tricked out of renting a comfortable house after already selling their previous home, the McAllans are forced to live on their farm itself in near-poverty conditions as the patriarch of the family, Henry, struggles to turn a profit in a rapidly-mechanizing world. Not far away live the Jacksons, who farm the land for the McAllans. When the United States enters the Second World War, Henry’s brother Jamie and the Jacksons’ eldest son Ronsel join the armed forces and fight in Europe, Jamie in a bomber wing and Ronsel in the famous Hellcat tank division. After the war ends and both return home, they find in each other a fellow veteran that understands the struggles of adapting to civilian life and overcoming psychological trauma. Ronsel’s experiences in Europe, however, have shown him life without the pervasive racism of Mississippi, and both his confident behavior and the revelation of his relationship with a white woman abroad leads to terrible consequences.

The themes and myriad episodes contained within Mudbound cover an astounding amount of ground, much of which has not been seen in similar stories in popular media. The experience of black veterans is rarely shown, as is the negative experience of the ‘Greatest Generation’ in returning from the war in general. The everyday plight of the Jacksons is also depicted in stark detail; in simply breaking his leg, the family patriarch Hap endangers the entire family’s ability to survive. Even more distressing is his wife Florence’s dilemma in caring for the McAllans’ children when they fall deathly sick. Success might bring with it some level of gratitude, but failure would surely see Florence blamed. We also applaud the manner in which the harrowing climactic lynching scene was portrayed; the brutality of racial injustice in the post-Reconstruction South must be confronted head-on, and Mudbound pulls no punches in this regard, even without the results of the lynching proving fatal.

As mentioned above, however, Mudbound was never able to ascend to the level of a truly memorable film due to its predictability. From her initial introduction to Jamie, it’s obvious that Henry’s wife Laura will have an affair with the dashing, caring young man. Of course both Jamie and Ronsel will return from the war with deep-seated trauma, and of course they will work through it with each other. The tragedy of Ronsel’s treatment at the hands of a lynch mob led by Henry and Jamie’s horribly racist father is equally inevitable, though this is perhaps more praiseworthy; a happy, conciliatory ending to this story would certainly not be representative of an honest portrayal of race relations during the period. The decision to make Henry and Jamie’s father a member of the Klan also (for us) cheapened the impact of Mudbound’s conclusion, as it swerves to miss a chance to emphasize that the pervasive racial atrocities of the South were not limited to bands of men in white hoods.

All this is not to say that Mudbound does not deserve a viewing; far from it! Its performances are fantastic (as evidences by Mary J. Blige’s Academy Award nomination for her portrayal of Florence Jackson) and its story remains gripping. It is a solid film, and one that, for those less familiar with the time period or similar stories, should be revelatory and highly moving. We would still recommend to those interested or even ambivalent about watching it. We would simply warn them not to expect the unexpected.

One reply on “Solid, yet Predictable: Dee Rees’s Mudbound”

This sounds similar to my ultimate criticism of “Red Tails”, the war movie about the Tuskegee Airmen that came out in 2012. In my opinion the characters were flat and the plot was predictable which made for a disappointing viewing experience. I was particularly aggravated because the real-life story of those men basically writes it’s own movie; and yet the Wikipedia page was a more interesting read to me than sitting through the film. I will give this one a try though!