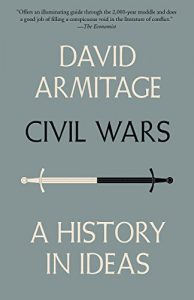 I first encountered David Armitage through a textbook in my Atlantic World survey course sophomore year at Gettysburg. That book, The Declaration of Independence: A Global History, is an outstanding bit of intellectual history. I still have it, packed away in a box somewhere, and it was likely one of the first inspirations for my eventual turn away from American history and towards a larger perspective. When I learned of Armitage’s 2015 history of comparative civil wars, it was only a matter of time before I got around to reading it. While its contents didn’t quite live up to my expectations, Civil Wars certainly proved as intellectually stimulating as I’ve come to expect from this distinguished historian.

Armitage begins his treatise on civil wars with a brief survey of the modern importance of coming to grips with this slippery idea. While war between nations has precipitously decline in the last seventy years, this ‘Great Peace’ has seen an ever-increasing number of internecine conflicts in the developing world. Armitage remarks that, though there are any number of venerable treatises unpacking war itself, there are no great works that attempt to come to grips with civil war. Armitage is very frank that he is not attempting to compose that work, instead opting to lay at least some groundwork for understanding our own conceptions of civil war by tracing the history of it as an idea in the western world from Rome, through the Enlightenment and nineteenth century, to the present as it evolved from a near-inconceivable rupture of the civil community to a negative branding for revolution to a practical consideration in geopolitical relations.

So goes the course of Civil Wars, and so begins a perplexing journey through intellectual history. At about 250 pages, it is a surprisingly brief survey of its material, even if only confined to four specific eras of writing. I constantly found myself questioning Armitage’s choices of examples and arguing with his conclusions; many times his writing blurs the line between an historiography of civil war and an analysis of the topic itself. Civil Wars is very obviously unequipped for the latter, with no definition of civil war to be found in its pages and an extremely Euro-centric and presentist view of its subject matter if it is anything other than a catalog of one peculiar Western strain of thought.

Out the other side of this muddle, however, comes a final chapter and epilogue that very effectively drive home the necessity of understanding all the conceptions of civil war that currently govern our modern world order. Armitage is at his best when deftly illustrating how civil wars form a paradox of diplomacy, on the one hand inviting intervention from other powers interested in advantage or humanitarian relief, while on the other falling within the internal concerns of the state in which other powers are expected not to interfere. This paradox governs any modern attempt to define international codes of conduct, and so forms the key to how we respond to this burgeoning age of civil wars. While I’m generally not the biggest fan of works of history that only exist to deal with contemporary issues, Civil Wars does so in an organic and highly-readable manner. I highly recommend it, if only to spark your own ruminations on the dilemmas Armitage uncovers. My own will follow before too long here on Concerning History.