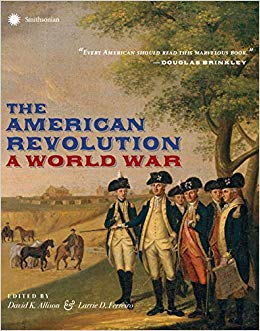 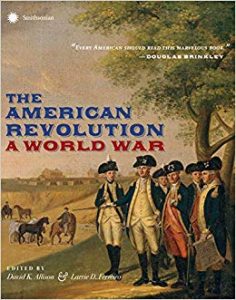 Our loyal followers, and probably anyone who has read a few of my pieces here at Concerning History, know that I love breaking down American exceptionalism and arguing for a more comprehensive exploration of the global dimension of American history. It’s kind of my thing. So when I opened my parents’ Christmas package this past year to find The American Revolution as a World War, I was beyond thrilled. As I eagerly devoured it, I realized I had at last found an engaging, approachable primer perfect for introducing students and casual historian to the grander dimensions of world history that have come to form the bread and butter of my own historical understanding.

The American Revolution as a World War is a Smithsonian publication, designed as a supplement to its relatively new special exhibit of the same name at the Smithsonian Museum of American History. As such, it’s larger-than-usual pages are filled with high definition pictures of artifacts, paintings, and spotlights on unusual trinkets. It’s history is not guided by its material culture, however, but rather supplemented by it. Each chapter is written by a notable historian, and are divided into three sections. The first details the strategy of each major European power to participate in the war (Britain, France, Spain, Netherlands). The second explores the war ‘on the fringes,’ from British campaigns in India against Mysore to often-ignored Spanish campaigns against British West Florida and the participation of Native Americans in the southeast and western theaters. The final section concludes The American Revolution as a World War with reflections on the imagery, historiography, and general legacy of the Revolution as it has been currently written, and steps to take to re-write and re-imagine the war in a more fitting, global manner.

The history collected by the Smithsonian for this volume is excellent, combining an engaging narrative with compelling information and analysis that is lends insight for both the general public and more academic historians. The breadth of subject matter ensures that, no matter what a reader’s specialty may be, they will find something new within its pages. At times certain chapters contradict each other in minor ways (calling a battle indecisive versus calling the same battle a French victory, for example), but even this is an informative lesson in how one’s subject matter and sources can subtly bias one’s historical analysis.

For any interested in American or global history, I cannot recommend The American Revolution as a World War highly enough. While it is unlikely I will be able to get back to DC to see its companion exhibit any time soon, I’m sure that it is well worth the trip if it holds even a fraction of the value of this volume. I know that my view of the American Revolution as a cog in the larger cycle of eighteenth century European wars has only been cemented, and its chapters will certainly see future use as I introduce students to this grander perspective on our nation’s seminal conflict.