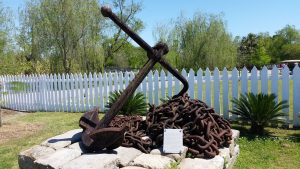 Heather and Bryan had the pleasure of traveling to New Orleans, Louisiana for a week in the spring of 2019. As with any good history nerds, much of their trip was devoted to seeing the unique historical sights of the lower Mississippi. This is the third installment in a series on their experiences of how the many facets of New Orleans history are interpreted for the public.

In the first installment of Heather and my series musing upon the many different facets of history we encountered while visiting New Orleans this April, Heather compared the interpretation of plantation life we encountered at Oak Alley and Whitney Plantations. The latter was assuredly one of the most fascinating elements of our entire trip, as we both found Whitney’s exclusive focus on the lives of the enslaved refreshing and necessary. As we embarked on our tour, however, I began to notice something I did not expect: a sense of levity among tour guide and tourists. 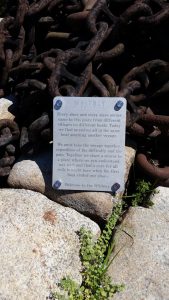 Now don’t get me wrong; I love some good laughter on a tour. Indeed, I told my fair share of jokes and wry observations on my walking tours of Fredericksburg, Chancellorsville, and Spotsylvania battlefields during my time as an intern there. Whitney, however, had promised to be different. The very first thing we had read on the grounds had been a plaque, pictured to the right, that warns visitors of the uncomfortable conversations about to take place while simultaneously arguing for their necessity. For any historical conversation worth its salt to do its job, there must be some kind of connection between the interpreter and the uninitiated; you cannot teach your lesson if your charges decide that they do not trust your words. This is doubly true, I imagine, at Whitney: in the middle of what was, one hundred and sixty years ago, the heart of the Slave Power and is, still today, deep in territory not exactly kind to ideas of racial justice, the plantation and its guides must ride a fine line between staying true to their mission and keeping visitors receptive. As I witnessed our guide, Ali, trade laughing stories about hand-me-down cane knives with a white family just around the corner from the slave cabins, however, I couldn’t help but feel as if something inappropriate was going on.

Perhaps this feeling stemmed from another surprise I was in the midst of encountering: the conversations taking place were not nearly as uncomfortable as I thought they would (or indeed should) be. In its interpretation of Louisiana plantation slavery, Whitney makes a very key choice. While shedding full light on slaves’ suffering, the plantation museum and guides do so in a manner that is consciously un-accusatory of white people. Instead, they take an ironically more radical but less racially-charged stance against the wealthy and, at times, capitalism itself. Phrases like “If it wasn’t black people, it would have been someone else” and the comparison to similar experiences among white indentured servants served to ameliorate blame among any non-uber-wealthy white visitors, and the museum even at times tells a conveniently edited narrative to reinforce these points (for example, implying that the Papal Bull authorizing slavery was a fig leaf of modesty after the fact, ignoring that slavery had been based on religious lines in Christian Europe for a millennium before the Atlantic Slave Trade).

While I’m all for a greater class conscious among modern Americans, here I felt it came at the cost of a truly honest conversation of whites’ role in slavery, even and especially that of poor whites and yeoman farmers. Ultimately, while Whitney is among the best plantation interpretation to be found south of the Mason-Dixon, and certainly in the Deep South, it left me still looking for those uncomfortable conversations it promised.