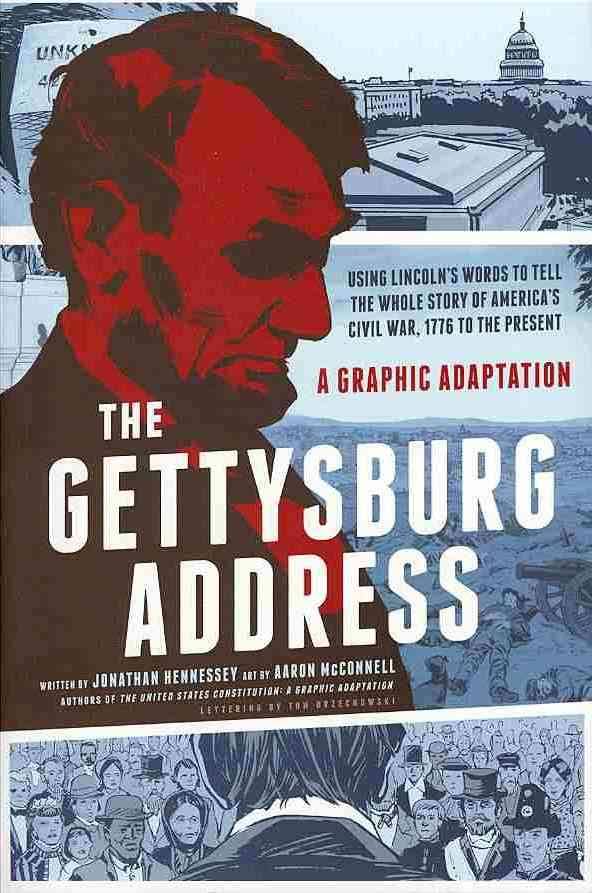 This book caught my eye when I was browsing a comic store in Gettysburg before I graduated in the spring of 2018. While I rarely read graphic novels in my own time, I had read and analyzed a number of graphic “histories” as part of courses at Gettysburg, from Art Spiegelman’s Maus to Trevor Getz and Liz Clarke’s Abina and the Important Men. Enjoying these in class, I also read and enjoyed Marjane Satrapi’s Persepolis and John Lewis, Andrew Aydin, and Nate Powell’s March series.

Despite gaining a greater appreciation for the genre through these positive experiences, The Gettysburg Address: A Graphic Adaptation sat on my bookshelf, being packed and unpacked through several moves across the country. Now living on the west coast, I find myself missing the feeling of being immersed in Civil War history at Gettysburg. Feeling particularly nostalgic one day, I picked up the graphic history and let myself be whisked away to the world of Lincoln, secession, and the meaning of the Civil War.

The Gettysburg Address: A Graphic Adaptation takes a unique approach to analyzing President Lincoln’s famous speech–beyond the fact that the analysis is presented in graphic form and aimed at a younger audience. The book is broken up into numerous chapters, each titled after a clause, line, or paragraph from the Gettysburg Address. Each chapter then uses that piece of oratory to explore the deep roots of the Civil War, the war itself, and its legacy. The words offer ready-made stepping stones to explore themes as diverse as the meaning of sovereignty, the debate over the relative importance of the Declaration of Independence and the Constitution, and the history and impact of American chattel slavery–a testament both to the timeliness and succinctness of Lincoln’s words and the interpretive skills of the book’s authors. Overall the book reads more like a history of ideas rather than events and people.

As I alluded to earlier, the intended audience is clearly middle and high school students of history. Throughout the book, complex themes and ideas are defined and elaborated upon in a manner not necessary for more advanced readers. This did not necessarily detract from my own reading experience, though it may have slowed the overall pace at which I read the book due to the explanatory detours. However, the manner in which these terms and concepts are explained throughout the book is much more concise and effective than some definitions I may have previously endured when learning of them for the first time. Moreover, the book manages to explore and interpret understudied aspects of the Civil War like how a dispute over the United States’ founding date influenced views over secession’s legality. While written for Civil War history newcomers, the book can entertain a buff all the same.

With any work of graphic literature, the pictures can be as important as the words. The Gettysburg Address: A Graphic Adaptation is replete with colorful and poignant illustrations, usually complementing the prose but occasionally making statements in their own right. Some pages contain compelling representations of motifs like secession and King Cotton that mirror or parody 1850s and 1860s political cartoons. Other illustrations show more contemporary characters interacting with their history through visits to museums and archives. Perhaps the strangest depictions show an ethereal Lincoln travelling through space-time, consulting everything from glowing orbs to the Founding Fathers while seeming to observe the events of history as some sort of omnipotent–but not omniscient–celestial judge. I’ve seen Lincoln interpreted in many ways, but I have to admit that was a first. I would not say that the meaning and impact of the book turns on its illustrations, but they do at least add an aesthetic appeal and contribute to the book’s accessibility by breaking up its text.

It’s difficult to compare The Gettysburg Address: A Graphic Adaptation to other graphic histories I’ve read for one simple reason: all the others follow a single character through a series of events, often in memoir form. The Gettysburg Address is not this. Graphic novels–and graphic histories by extension–are probably more powerful and compelling on the whole when they do follow a single character, but I still think The Gettysburg Address is a noble work within the genre itself. The synthesis of illustration and text leaves a bit to be desired, but that might just be because that synthesis is less natural in a non-memoir type history.

Finally, I have to admit that I was left particularly disappointed by one particular aspect of the graphic history. The book opens with four particularly poignant scenes: Tillie Pierce’s family emerging after the battle to survey the damage; several Black Gettysburgians trying to evade capture at the hands of Confederate patrols; battered and beaten Confederate soldiers trudging through knee-deep mud during their retreat from Gettysburg; and President Lincoln anxiously standing by a telegraph sounder waiting for reports from the battle. These scenes pulled me in immediately, especially that of Black Gettysburgians evading capture during the Gettysburg Campaign, a topic I worked on extensively while a student in Gettysburg. I was looking forward to following these characters as they experienced the events leading up to the battle, the battle itself, and its aftermath. Alas, this was not to be the case; these brief vignettes would be their first and last appearances. Perhaps this will be fertile ground for the next Gettysburg-themed graphic history. With the genre becoming more and more mainstream, it wouldn’t be too far-fetched.