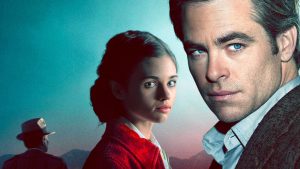 by Bryan and Heather

In a nice change of pace from the history we usually follow, we decided to take a gander at the much-publicized TNT miniseries I am the Night, directed by Patty Jenkins and starring Chris Pyne (their first project together since Wonder Woman). We were cautiously excited; the promotion for the show promised a noir mystery set against the backdrop of 60s Los Angeles and somehow connected to one of the most famous unsolved murders in American history. We dove in, but instead of an intriguing thriller, we were treated to a long, dull slog.

I am the Night focuses its story on two main characters: Fauna Hodel, a mixed race young woman searching for the truth of her parentage, and Jay Singletary, a disgraced reporter and Korean War veteran that gets wrapped up in Fauna’s search and the shadowy events swirling around her grandfather, George Hodel. Together, Fauna and Jay uncover and confirm shocking secrets about the Hodel family that will rock them both to the core.

Perhaps the most striking aspect of I am the Night was that it is, for the most part, an entirely true story. Indeed, at the end of each of its six episodes, the credits are preceded by black and white photographs of people and locations featured in that episode. Even the outstanding elements (namely, direct links with the Black Dahlia murder) are just current theories given more concrete acknowledgement, not entire sensationalist fabrications. Los Angeles, too, is beautiful, and the recreation of everything from its nightlife to its black communities is perfectly atmospheric.

The weaknesses of I am the Night, however, lie in its pacing and just how it included its morsels of history. Be warned: this show is incredibly slow. The first four episodes are essentially all rising action; there are no revelations, climaxes, or even really dangerous situations, save a single moment. Then, in the penultimate episode, everything drops. All the information, all the connections, in one fell swoop and almost out of nowhere, especially as you might be expecting them to pertain to certain murder, not, well, what they end up being. The history, too, seems choppy and mishandled. As well as supposedly being a murder mystery, I am the Night also touches on race relations and veteran trauma, yet rather than feeling like organic elements of the show, events like the LA Race Riots or the Korean War or even the Black Dahlia murders just pop up like Easter eggs and then go away.

In the end, we were perfectly ambivalent about I am the Night. Was it particularly good? No, not really. Was it offensively bad? No, not that either. When it comes right down to it, unless you’re a fan of noir films or Los Angeles, this show will most likely feel just like a monotonous time sink not worth what it returns. Perhaps Fauna Hodel’s actual memoir might provide more engaging fare.