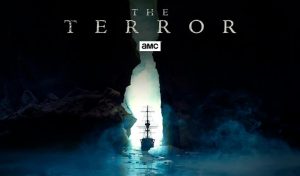 Almost a year ago now, Concerning History launched a series entitled “Episodic History,” in which each of us expanded upon some ideas that we felt would make for riveting historically-based television. It should come as no surprise that all of us had to seriously whittle down our lists, and that further installments of this series are in the works. Imagine our surprise and enthusiasm, then, when one of Bryan’s own, cut, ideas received just the treatment we were arguing for. From its first trailer, then, we couldn’t wait to watch AMC’s drama recounting the story of the doomed Franklin arctic expedition. As we eagerly consumed each episode, however, the story The Terror chose to tell got stranger and stranger.

In 1845, two British ships, the Erebus and the Terror, set sail from London to find the Northwest Passage. Any commercial use for the fabled sea route around North America to China was fast fading into oblivion, but with Britain’s renewed global expansion came the desire to explore for exploration’s sake. There was a certain glory to be had from expanding human knowledge, and so the expedition set sail under the command of Sir John Franklin (played here by the always-amazing Ciaran Hinds), equipped with some of the most advanced naval technology of the day to help weather the arctic conditions. It would never be heard from again. Countless contemporary and modern expeditions sought clues to the fate of these doomed sailors, turning up tantalizing hints at desperate efforts to escape the Arctic pack ice, traces of encampments, bodies, and even ominous indications of cannibalism. Only recently, in 2016, were the ships discovered, held fast in the unmelting pack ice of the far north.

Rarely has a seen been set so perfectly for a period psychological thriller. The premise is, perhaps, a familiar one; a band of Europeans, intent on exploring terrain not meant for human habitation, blithely forging ahead with misplaced confidence in their own mettle. The Terror does not disappoint in its execution of such a bitter, foreboding environment. The cast looks every inch a nineteenth-century British crew of scientific exploration, and the niceties of naval rank are both admirably observed and add another twist to the story as the men cling to the accompanying illusions and trappings of civility far longer than perhaps a modern audience would expect. There are even nice sequences explaining the contemporary process for diving and breaking ice, and a rather important subplot concerning the deficiencies of early canning methods for food.

Not all is as it seems in The Terror, however. One would think that the dangers and loneliness of a doomed Arctic expedition would be enough fodder for a riveting show, but apparently AMC disagreed. The men of the Franklin expedition have entered terrain forbidden to men by more than weather, and after their ships become locked in the Arctic pack ice, they find themselves stalked by a dark, looming presence just beyond their vision. This presence turns out to be the Tuunbaq, quite literally a demonic polar bear that Inuit shamans have banished into the far north. Tuunbaq persists in seriously hampering any and all efforts to escape the expedition’s inexorable fate, and it is Captain Francis Crozier’s respect for the Inuit shaman woman charged with handling Tuunbaq that ultimately saves his life, alone out of the entire expedition. We later learned that The Terror was adapted from a novel of the same name, so we can’t entirely blame the storytelling decisions of the showrunners. However, the result is unfortunate from the perspective of a student of history; not only does Tuunbaq make The Terror feel unnecessarily like The Walking Dead, it also falls to prey to yet another example of the, as Heather calls it, “native-people-are-mystical-and-scary, ooga booga” trope.

All this being said, The Terror remains a riveting personal drama, filled with intense horror both physical and psychological. The performances are terrific and gripping, and make the viewer hope that at least some of these men will make it out alive, even though we know it is a vain hope. We still recommend it to anyone looking to satisfy a nineteenth-century or naval history itch. We only wish it had a bit more history in it.